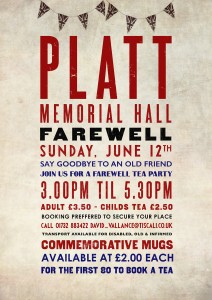 The building of the new Memorial Hall continues with the construction of the war memorial now underway as well as the internal fit-out and decoration. As mentioned before, please do look at our website at www.plattwarmemorial.org to see the photographs which Scott Wishart is taking to show the progress of work going on at the new hall.

If you want to come along for the ‘Farewell Tea Party’ being held on the afternoon of Sunday 12th June, please book with David Vallance on 883422 as it will be very well attended and we need to know the numbers so that we have enough food to go round! This coincides with the Queen’s 90th Birthday celebrations and provides an appropriate occasion for the whole village to say goodbye to the old hall after more than 90 years. Please see the advertisement on page 28 for details.

At 7:30 am on 1st July, there will be a gathering at the memorial at which a whistle will be blown three times to mark 100 years exactly from the start of the Battle of the Somme. This is significant because after the opening ceremony there will be a number of showings of a remastered film of the Battle of the Somme. This was shown in Borough Green cinema in 1916 and shows scenes from the battle at which so many lives were lost, including some of those named on the memorial.

As previously reported, the formal opening ceremony will take place on 3rd September, with our MP, Tom Tugendhat, performing the opening ceremony, followed by the rededication of the memorial by the Bishop of Rochester. Please let us know if you or someone you know has a relative named on the memorial, so that we can extend a formal invitation to attend.

There will be an exhibition which will run for a week about the war memorial, with information about those whose names are on it and also about the construction of the new hall and the moving of the war memorial. There will also be showings of the film on the Battle of the Somme which we have been given permission to show by the Imperial War Museum. This will mean some disruption to the hiring of the hall during that period, so please check with Barry Baker if you have a regular booking.

At the end of the week of celebration there will be a formal dinner dance on 10th September. Please watch this space to find out when tickets for all these events will become available.

Sandy Mackay, Chairman of the Trustees