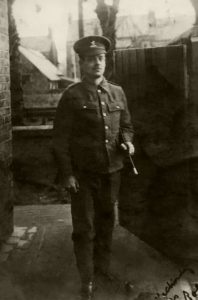 Between 1876 and 1896, ten Piper children were born at Roughway Farm, near Plaxtol, and were the offspring of Henry Joel Piper, a farm worker from Heathfield in Sussex, and his wife Emma Diprose. The fifth child, named Joel, was born on 1 April 1895 and when old enough probably attended school in Plaxtol, after which he became a builder’s apprentice. In 1903 Joel’s mother died, and his father subsequently remarried in 1905 to Alice Ann Banfield.

By 1911 Joel had gained employment as a carpenter in the building industry and was living with his family in Crouch when war broke out in August 1914. He visited the recruiting office in Maidstone with Thomas Terry (who resided in Platt) on 9 September 1914 and enlisted in the infantry.  Both lads joined the Royal West Kent Regiment and assigned to the 8th (Service) Battalion, which was formed several days after they signed up. The battalion would form part of the 72nd Brigade in the 24th Division of Kitchener’s Third Army and consisted of men who had enlisted at the end of August and during early September. The rate at which men volunteered had increased which was possibly due to the news filtering back to the UK that the Regular Army had been in action at Mons, and were now in retreat.

On 12 September 800 men of the 8th Battalion left the regimental depot in Maidstone and marched to camp in Shoreham. Although there were a decent number of tents; blankets or equipment of any other description was noticeably absent. With nothing to cook, or eat rations from, the first night was said to have been a ‘severe trial of the temper and willingness of the men.’ The Army had been overwhelmed by the sheer number of new recruits, and found that uniforms, rifles and other items of basic equipment were in short supply. As part of ‘K3’, Joel’s battalion had to wait until ‘K1’, and ‘K2’ had been fully kitted out resulting in training being impeded, and the men had to make do with the limited resources they had at their disposal. For example, many men trained in their civilian clothes and carried large wooden sticks shaped like rifles.

In November 1914, Joel’s unit moved to Worthing and remained there until the end of March 1915, when they briefly returned to Shoreham. By the time the 8th Queen’s Own arrived in Boulogne at the end of August, plans for a coming offensive by the First Army were well advanced, with the 24th Division allotted to the 11th Corps who constituted the reserves for the attack. After three weeks camped near Montreuil, the West Kents began the long march to the battle area during the evening of 21 September and plodded along congested roads for the next four days. Progress was slow and exhausting, and the battalion primarily moved at night.

The Battle of Loos began on 25 September, and after an aborted attempt to move into the village of Hulloch (which was found to be occupied by the Germans) Joel’s unit eventually found themselves by nightfall in trenches about 1,000 yards west of the Lens-La Bassée road. The following morning, having not had very much by way of sleep, food or water, Joel’s unit advanced towards the German line. The Queen’s Own, in the first wave, were on the left of the attack and met stiff rifle and artillery fire from the outset, with machine-guns sweeping their flanks as they proceeded up the slopes towards the enemy trenches.

Upon reaching the enemy lines, the battalion discovered that the preliminary British artillery bombardment had been ineffective and the wire was almost entirely intact. Horrifically exposed to the full fury of the German machine guns, the men threw themselves to the ground for cover and returned the enemy’s fire.

By the day’s end, of 24 officers and 800 men who had gone into action, only one officer and 250 remained effective. Joel was one of the 800, and his body either never recovered or later identified. Also missing in action that day, and later presumed dead, was Joel’s friend Thomas Terry.

In addition to the Platt War Memorial, both men are commemorated on the Loos memorial. Heartbreak was to hit the family again almost a year later when Joel’s brother Peter lost his life at the Somme; however, his brother Thomas survived the war and died in 1971.