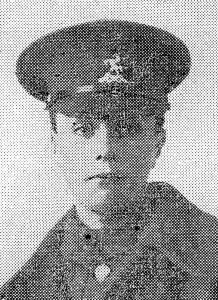 Frederick Ingram was probably born ‘Albert Ellis’ on 14 July 1899 in Clapham, London. His parentage is currently unknown, however by 1901 he was living as a ‘nurse child’ (i.e. fostered) with Thomas and Mary Ingram in Crouch. In January 1904 Frederick started at Platt School, after which he worked for a while at Basted Paper Mills before enlisting in Maidstone with The Queen’s Own (Royal West Kent Regiment) in March 1917. Joining the Training Reserve Frederick was eventually posted to the 7th Battalion on the Western Front around June 1918 and likely arrived with his new unit in the field with a draft of 43 other men on 30 July. At the time the battalion was training northeast of Amiens at St. Pierre-a-Gouy but on the cusp of moving back up the line in preparation for an offensive that would become known as the Battle of Amiens.

Unknown to Frederick, his time at the front was to prove extremely short-lived, and by the time he reached the ‘Roma Line’ on 6 August, he only had 48 hours to live. At 2:00 am on 8 August the battalion assembled in battle formation astride the Bray-Corbie Road. As dawn broke, a thick fog had enveloped the landscape, obscuring all movement outside a 50 yards’ radius. Zero hour was at 4:30 am, and even before reaching their “jumping-off line” at Burke Trench, the West Kents found themselves delayed by enemy machine-gun fire. This loss of time caused the battalion problems in keeping up with the creeping artillery barrage that had preceded their assault. The fighting was fierce, and the battalion failed to reach their final objectives; however, they doggedly held on to any gains they did make. 198 ranks were either killed or wounded during the day; Frederick was amongst the former. His commanding officer wrote to Mary:

I am very sorry to have to inform you of the death of your son in action on August 8th. He was bearing himself magnificently by all accounts, and we are all very sad to know he has gone. He was very popular with both officers and men, and was an extraordinarily good soldier. Please accept my deepest sympathy.

Frederick’s body was buried in the Dive Copse British Cemetery, Sailly-le-Sec and he was remembered in a special memorial service held for him in Platt Parish Church.