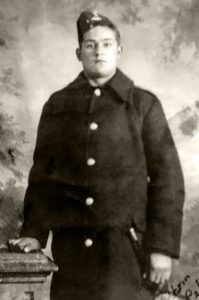 Peter Piper was born on 22 December 1896 at Roughway Farm in Plaxtol, the youngest of ten children (four brothers, five sisters) of Henry Joel Piper, a labourer from Heathfield, and his wife, Emma Diprose. He probably attended school in Plaxtol, and in 1903, when he was six, tragedy befell the family when his mother died. His father eventually remarried two years later to Alice Ann Banfield, and a half-brother named Herbert John was born in 1907. After leaving school around 1910 he found work as a farm boy and then later as a quarryman, and by 1914 his family had moved to Forge Cottage in Crouch.

Like many other young men in the parish, Peter’s older brothers Joel and Thomas enlisted at the outbreak of war, and perhaps keen to do his bit, Peter also signed up as soon as he turned 18. Like Joel, he joined the Royal West Kent Regiment, enlisting in Maidstone on 2 January 1915. At the time he was recorded as being 5’ 7” in height, weighing 130lbs with blue eyes and dark hair. Peter was posted to the 3rd (Reserve) Battalion which was a training unit based in Chatham, however, four months later on 30 April he was discharged from service having been deemed ‘not likely to become an efficient soldier.’

Undeterred, Peter re-enlisted in Maidstone on 15 July and underwent a second medical examination. On this occasion, the examining officer recorded that he had a history of fits, with two occurring during the preceding 12 months (perhaps the reason for his previous discharge.) Despite this, he was again passed fit for service and returned to his old unit.

Private Piper was eventually sent overseas to France on 8 March 1916, and on arrival in Calais at the 12th Infantry Base Depot, was assigned to the 6th (Service) Battalion. On 13 March he wrote to his sister:

I am writing these few lines hoping they will find you quite well and I hope you got the other letter safe. I find it a little different from Chatham out here and we are having some nice weather. I found some of my old mates here so I am not all alone but I’ve not found Tom yet. I would rather have my old feather bed than these tents but still I have to put up with it. I am stopping at a place called the base but I must not tell you the name of it. I think this is all the news this time. Will write again when I get the chance.

With love from Peter.

A week later Peter was sent with a draft of 48 other men to join the battalion, who were billeted at Annequin, and on arrival, he joined ‘D’ Company. He wrote again to his sister:

In answer to your letter I am writing these few lines hoping you are keeping well. I have been shifted from the base to another place. It is about two miles from the firing line. We can see the shells bursting when they are fired at the aeroplanes, but that don’t make me downhearted. Hope I can find Tom now I am here. When you answer the letter don’t put A.P.O.J.B.B.S.17 but put all the other and No. 13 platoon now I think.

I must close. Hope you get it safe with love and kisses from Peter.

P.S. Please can you ask Flo to write to me and then I will send her a card.

Peter’s first taste of life in the trenches came on 27 March when his battalion took over a section of the line in the Quarries Sector from the 7th Royal Sussex Regiment. There was little in the way of trouble from the enemy, however, while he was there melting snow flooded the trenches. On 25 April the battalion was withdrawn to Allouagne where they began a two-month period of training before the summer’s ‘Big Push’.

On 7 April he wrote:

I am writing a few lines to you in answer to your letter which I received quite safe. Glad you like the card which I sent and I’ve sent Flo one as well. I have sent them all one now excepting Doll and I won’t not before I hear from her. Glad to hear that the Zeps did not do much damage and I wish I were at Chatham again, it would be better than out here, but still I shall have to put up with it until I get sent there, and the sooner the better. I am sending these two stamps back as we are not supposed to use them out here and I cannot do anything else with them. I don’t suppose you will mind Fancy Harry coming home after all this time. I bet Dad was surprised when he saw him as a sergeant. I have not seen Tom yet and Flos letter found me alright. Now I think this is all this time. With love from

He wrote again on 3 May:

Just a few lines to you hoping you are quite well. Glad to say I am going on very well, excepting a boil on my neck which I’ve had to have lanced. We are having some very nice weather here and it is very hot some days. Better than a lot of rain. I have not seen anything of Tom yet but I have wrote home for his address so I can write to him and then perhaps I shall be able to find him. Did you get my other letter, which I wrote I sent those stamps back because we do not use them out here. Have you seen or heard anything from Dolly lately? I don’t know wether (sic) to write to her or not because she don’t write to me when I do. I had a letter from Lizzy a few days ago and it was a nice long one to. What a rough time out there has been in Dublin these last few days.

At the end of June, The Queen’s Own began moving south towards the Somme area. They were now up to full strength and following an extended period of rest and training, were in good condition and ready for the imminent battle.

On the first day of the Somme campaign the battalion was in reserve, however, the next day, while at a position just west of the ruins of Ovillers, they received orders to resume the attack in the early hours of 3 July. In the assault, ‘A’ and ‘C’ Coys were to take the first enemy line, while ‘B’ and ‘D’ were to pass through and attack the second. Unknown to the battalion, and in a replay of events two days before, much of the enemy wire had escaped destruction by the pre-battle bombardment which would prove fatal for Peter’s company.

At 3:15 am the barrage lifted off the German front line and the two attacking companies in the first wave advanced under heavy enfilade machine-gun fire towards their objective. Despite the immense danger they bravely pushed forward and successfully took the line, and cleared it of any remaining Germans. Next came Peter’s company who, under covering fire from the two advanced companies, made their way across the captured enemy positions and charged towards the second line where they met a deadly hailstorm of enemy bullets and bombs. Any West Kents who made it as far as the next objective found themselves blocked by the uncut wire, and were mercilessly mown down in front of it.

By the end of the day, of the 617 men who had gone into action, 375 were killed, wounded or missing. Peter was among the latter, and his body either never recovered or later identified. He was just 19 years old. Also killed in the attack was Richard Haxon Andrews from Wrotham Heath, who was in ‘A’ Coy.

In addition to Platt, Peter is also commemorated on the Thiepval Memorial and the Tonbridge War Memorial .