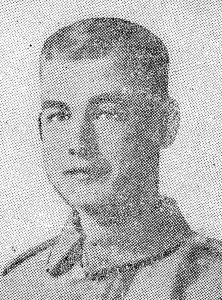 George Louis Parris was born in Offham on 13 February 1899, the sixth of 12 children to James Parris, a council labourer, and Jane Standen. In 1901 the family resided at 3 Kettle Cottage in Offham, but during 1909 moved to Platt, where they lived at 15 Whatcote Cottages. In November of that year, George and four of his siblings transferred from Offham to Platt School.

Before the war, the four oldest Parris brothers all joined the Grenadier Guards, with three eventually seeing action on the Western Front. George enlisted with the Royal Fusiliers in Maidstone during March 1917 and finally sent to France on 16 March 1918, where he joined the 24th Battalion.

By the summer he was based on the Somme and would have taken part in the action on 23 August when the British attacked along a 33-mile front that ran from Mercatel (5 miles south of Arras) to Lihons (north-west of Chaulnes). In this, the 24th, attacking south-east of Ayette, faced heavy artillery fire from the start and in crossing the Arras – Achiet-le-Grand railway also came under rifle fire from a small post on their right. The way ahead took them further into danger and soon, face with heavy fire from all arms, soon found themselves encountering machine-gun fire from both flanks. Undeterred, the battalion pressed ahead, finally reaching their objective and able to consolidate a position on the ridge west of Behagnies.

At 3:30 am on 25 August, the Fusiliers resumed their advance and began an assault on Behagnies. The attack appears to have surprised the Germans, and the British managed to take the town before defences could be adequately manned.

Just over two weeks later George was in action again when he was involved in an attack near Moeuvres. The battle began at dawn on 12 September, and during the morning of the following day, George was mortally wounded by machine-gun fire. He was just 19 years old.

His Captain wrote to George’s father:

It is with deep regret I have to inform you of the death of your son, which occurred September 13th. He was hit by machine gun bullets in an attack on that morning, and died soon afterwards, suffering very little pain. He was buried with some more of the battalion behind the firing line. He is a great loss to the Company and was greatly loved by his Platoon. I wish to convey to you the Company’s and my deepest sympathy in your great loss.

George’s grave is in Vaulx Hill Cemetery in the Pas de Calais and a memorial service was held for him in Platt Church in October 1918 during which it was mentioned that he had been a member of the Church choir and also the Platt Guild.