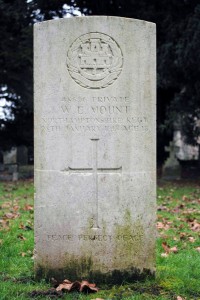 William Edward Mount was the son of a farm labourer named William Rueben Mount and his wife, Esther Higgins. He was born in Greenstreet, Sittingbourne on 4 July 1899 but grew up in Upper Platt with his six brothers and sisters, attending Platt School from 5 October 1903.

In 1917, shortly after his eighteenth birthday and while working as a gardener, William enlisted in the Army at Guildford and joined the 9th Battalion, Northamptonshire Regiment – a Territorial unit formed at Cley in Norfolk earlier that year. William would have been eligible for overseas service when he reached 19 and could have been sent to France in time for the advance into Flanders; however he had been suffering from what appears to be acute rheumatic fever and died in Cambridge General Hospital on 28 January 1918.

His parents brought his body back to Platt, and he was buried in the parish churchyard.