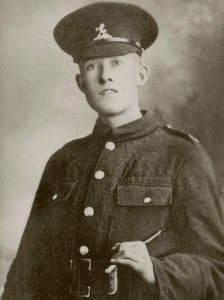 Ernest Rose was born in Offham on 17 April 1898. He was the second son of Alfred Herbert Rose, a woodcutter from Mereworth, and his wife, Elizabeth Ann Lawrence. By 1901 the family had moved to Wrotham Heath, and were living on Windmill Hill. Ernest started at Platt School on 21 April 1902, and by 1911 he lived with his parents and siblings at Comp.

Following the outbreak of war in August 1914, Ernest enlisted in Maidstone with the Royal West Kent Regiment, probably during January 1915, and in 1916 may have seen action at the Somme with the 1st Battalion. At some point in the war, he transferred into the Machine Gun Corps – initially serving with 8th Company, who became part of the 3rd Division in 1916.

In early 1918 Machine Gun Battalions were formed by bringing together four MGC Companies with each battalion taking the number of their respective divisions. Ernest was in one one of the companies from the 21st Division and therefore, on 24 February, became part of the 21st Battalion. By mid-March, Ernest would have found himself situated in a line of trenches running northwards from Epehy to Vaucelette Farm. The imminent attack by the Germans (usually referred to as the ‘Spring Offensive’) was known to the battalion, and before this, they had spent some time bolstering defences and ensuring they would be ready for whatever might be coming in their direction.

During the night of 20/21 March, the German pre-attack bombardment began, with the battalion targeted by a large number of gas shells which required the men to wear their gas masks for about 3 ½ hours. As dawn broke, a thick mist enveloped the battlefield which created great difficulties in ascertaining the enemy’s position. The Battalion War Diary records that:

All M.G.’s were very severely handicapped, and it is impossible to overestimate the disadvantages under which the defence was thus placed.

At 10:00 am Vaucelette Farm fell, and after receiving a report that the Germans were advancing towards them along Chapel Hill, Ernest’s unit concentrated nine guns in that direction. Meanwhile, on the battalion’s right, the 16th Division had been heavily attacked and were now withdrawing. The corps responded by ordering all remaining guns on this flank, which had become exposed, to act accordingly and hold the line. By late morning the mist lifted giving the men a fighting chance of holding off the enemy advance; however, the overwhelming number of troops pushing forward meant they had to fall back.

A counter-attack in the evening failed, and the machine-gunners fought valiantly on for another week before being taken out of the line. Ernest’s unit was reported as displaying the ‘utmost gallantry and self-sacrifice’ during this period.

On 2 April the battalion moved from Amiens to Locre and remained in Flanders until early May when they moved back into France and entered the trenches east of Bouvancourt at Vaux Varennes.

The Germans launched a second major offensive on 27 May that would become known as the Third Battle of the Aisne. The attack began at 1:00 am with a preliminary bombardment that included a large percentage of gas shells, and consequently, men in Ernest’s unit had to wear their box respirators until the danger had passed. At 4:30 am the barrage lifted, and a sizeable enemy force advanced towards the Allied positions. They were rapidly overrun and the battalion, which had become dangerously exposed on their left flank, were forced to make a hasty withdrawal while simultaneously fighting a rear-guard action.

The fighting continued for two more days, and by the close of operations on 29 May the battalion had lost 64 of their 76 guns. The human cost numbered 182 men recorded as being, killed, wounded or missing. Ernest was among the 62 wounded and died of his injuries on 30 May south of Reims at the Hospital Auban-Moët in Epernay.

He was initially buried at the Epernay French Military Cemetery, but exhumed in 1920 and reburied in the Terlincthun British Cemetery in Wimille.