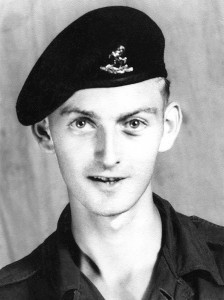 Between 1948 and 1960 Commonwealth armed forces fought a guerilla war against the Malayan National Liberation Army, who were the military arm of the Malayan Communist Party. The ‘MCP’ began attacking rubber plantations, mines, and police stations, derailing trains and burning workers’ houses with the view to ultimately overthrowing British colonial rule. The term ’emergency’ rather than ‘war’ was used because insurers would not have compensated plantation and mine owners if the latter label had been used. The British response to the situation was initially racked by uncertainty and a modicum of ineptitude, however, by 1950, a coordinated plan had been formed that included land reforms and the creation of new villages. At the time communist attacks were at their peak during 1951, a young man from Platt named Leonard Hollebon arrived in the country with the 1st Battalion, The Queen’s Own (Royal West Kent Regiment.) His time in the conflict was short-lived, and he has the tragic distinction of being the last known person from the parish to lose his life in combat since the Second World War.

Leonard George Hollebon was born at Kelvin Cottage in Platt on 11 January 1932. His father, Arthur, was a local bricklayer and had married Leonard’s mother Vera West two years previously. He was the eldest of four children and attended Platt School from 12 April 1937 until 27 August 1943 when he transferred to Borough Green. He is remembered as being a lovely chap, always making people laugh, and popular amongst the other children of all ages. He played football for Platt and got into trouble once with the police when it was discovered that he’d been eating strawberries in Mr. Bacon’s field. After initially denying he’d been there, Leonard eventually confessed but told the constable that at least half of the fruit he’d eaten was bad anyway.

He had been on National Service when he was conscripted into the West Kents and sailed with the regiment’s one remaining battalion for Malaya in February 1951. The operational area in which Leonard would find himself consisted of thick jungle and a few rubber estates and tin mines that stretched 70 miles northwards about 11 miles north of Kuala Lumpur.

Owing to the damp jungle conditions Leonard soon developed what was known in the First World War as ‘trench foot’, and was sent to a hospital to recuperate. As a member of the ‘walking wounded’ he wasn’t entirely excused from duties, and on 22 August he was detailed with escorting a man through the jungle on the back of a lorry. This ‘patrol’ involved little more than sitting with the passenger until they reached their destination, at which point the driver would return Leonard back to the hospital. Near Rawang, the lorry was ambushed, initially by hand grenades that were rolled down the hill into the oncoming vehicle, and then by machine gun fire. The British made a counter-attack however it was too late for Leonard, who was mortally wounded in the attack.

22413906 Pte. L. G. Hollebon, the first of the regiment killed in Malaya, was buried at Cheras Road Christian Cemetery, Kuala Lumpur. Leonard was not commemorated locally until 2016 when his name was added to the Platt War Memorial.