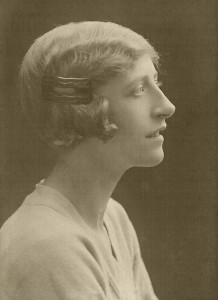 Hester Muriel McInnes was born in Nottingham during 1897, the third child of Malcolm James Rowley Dunstan, a director of technical instruction, and his wife – an artist named Edith Rose Turner who was the 2x great-granddaughter of the brother of Joseph Turner, the landscape painter. In 1901 the family lived at Newcastle Circus in Nottingham and by 1902 had moved to Wye in Kent where Malcolm became the principal of the South-Eastern Agricultural College.

On 4 November 1916, Hester married Cyril Hart Collins, an officer in the Royal Flying Corps, at St. Mark’s Parish Church in Regents Park, London with a son named Roy born in Wye the following year. Two daughters, Susan and Patience, were born in 1919 and 1922 respectively. In 1929 Cyril divorced Hester, and she remarried the same year to George Tronson McInnes who was a lieutenant in the Royal Navy. Another daughter named Bridget was born in West Malling during 1933, and at some point before the war, George and Hester moved to Yotes Cottage and then finally, Huntsman’s Lodge in Wrotham Heath.

On 15 October 1940, while visiting her mother at Wrotham Heath House, Hester lost her life in the air raid that devastated the area and claimed the lives of eleven local people. At the time, she was sitting in an armchair in front of the fire when the explosion outside sent a shock wave through the property and killed her. A boy who witnessed the aftermath of the attack later recalled that ‘the people in the house barely had a scratch on them, and were still sitting as if asleep’.

Locally Hester was well-known for her kindness and took an interest in many good causes. During the war, she reputedly ran a soup kitchen from Huntsman’s Lodge for army drivers. A villager later said that ‘She kept an open house and many whom she befriended thought a great deal of her’.

Photograph of Hester and Telegram courtesy of Edward Dunstan.