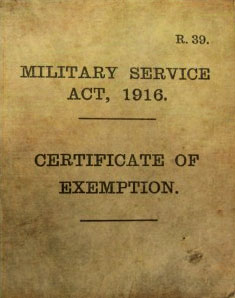 On 29 February 1916 Wrotham Urban Council held the first Military Service Tribunal in Borough Green. These Tribunals were formed to hear applications for exemption from conscription into the Army, and although not recruiting bodies themselves, played an important part in the conscription process. Most men were given some kind of exemption, usually temporary (between a few weeks and six months) or conditional on their situation at work or home remaining serious enough to warrant their retention at home. We have transcribed extracts from the Tribunals published in the Kent Messenger and Southeastern Gazette newspapers that concern men from Platt Parish in the period up until the end of 1916, with the view to adding those from 1917 and 1918 in due course.

The application of William Elliot, tree pruner and farm labourer, of Platt, was supported by his employer, Mr. Gardiner, who said he had only two men to assist him on his hundred acres of fruit land.

The Chairman: What is your normal number of hands at this time of year?

Applicant stated, in reply to the Chairman that he had no particular wish to serve in the Army, but he would serve if it was absolutely necessary. The Tribunal refused the exemption.

Mr. Adams of Crouch, in asking the Tribunal to exempt Alfred Bathurst, his groom gardener, from military service, or put him in the latest group, said his employee also had entire charge of more than two acres of land, and acted as caretaker in his (Mr. Adams’) absence.

Mr Pink: I don’t know who will fill the man’s place.

Mr. Coote said that Mr. Adams did not enjoy very good health, and when he was away Bathurst had sole charge of the house, plantation and gardens.

Another Member: We shall have ten times harder cases than this before us.

It was stated that Bathurst, who was 30 years of age, was married and had three children.

After some discussion the Tribunal decided to refuse the application.

George Bennett, miller, of Platt, was granted exemption and his workman, Albert E. Wimsott, 26, described as a rollerman, was put back for two months, Mr Bennett being told that he must try to replace him by a man beyond military age.

The Basted Paper Mills Company, in applying for the exemption of their clerk, Harold Sharp, aged 30, stated that as he had an intimate knowledge of prices, rates, and the keeping of their stock, he was indispensable to them. They were constantly being pressed by the Government offices for quicker and larger deliveries of paper, and any further loss of men would result in more delay.—Mr. Lance Monckton, who appeared both as solicitor to and a director of the Company, supported the application, stating that 75 per cent. of their work was Government work. He mentioned that owing to the death of Mr. C. R. Smith, much extra work had devolved upon his son, who was badged by the. War Office.

Champion: Could Sharp have been badged?

Monckton: I don’t think they badge the men of clerical departments.

Arthur Pearson, 40, married with seven children, fruit foreman to Mr Heron-Maxwell, Comp (whose place as Military Representative was taken by Mr H J Wood, of Malling during the appeal), was allowed conditional exemption.

Rennie A. Hollands, 37, married, market gardener, of Wrotham Heath, in his claim, said he cultivated about five acres of land, including three acres of fruit and vegetables. He also grew a great many hop sets.

The Chairman: Does anyone work for you?

Applicant: No, sir; I do all the work myself.

It was decided to refuse the application.

Applicant: It is very hard work indeed; that is all I can say about it.

Mr Pink: Then you can appeal.

Applicant: Then I will do so. It seems very hard luck after working hard all these years on the land.

H Stephen Hills, 24, horse driver, Platt, in the employ of his father, a coal merchant, whose other two sons are in the Army, adjourned for a fortnight for medical examination.

At a sitting of this Tribunal on Wednesday, Mr. Pink remarked, with regard to the case of Arthur Horscroft, 26, of Platt, married with three children, who was given one month (final), that he did not like forcing married men into the army when single men were to be seen walking about the district.

Joseph Baldwin, 31, Platt, postman, a time-expired Army man, who took part in the retirement at Mons, the fighting at Hill 60, and at Neuve Chapelle, was given three months exemption.

William Marsh Avery, 38, gardener, Platt, not being in attendance, was refused.

Philip H Hider, 24, of Platt, assistant sawyer, in the employ of Mr. Smith, one month, to give him the opportunity of obtaining a Government badge.

Harold Vidler, 28, single, Platt, pruner in the employ of Mr. Todman, nurseryman, and who stated that he had been passed for home service only, adjourned for production of copy of medical certificate, which he said he had lost.

Stephen F. Watts, 41, last June, living at Crouch, and a wheelwright and carpenter in the employ of Mr Hider, in his application, said he was also Secretary of the Kent United District of the Ancient Order of Foresters. Asked whether he repaired agricultural implements, he replied in the affirmative. Three months exemption was allowed, applicant to be medically examined before making another application.

The Tribunal were occupied some time in considering the case of Frederick C. Ashdown, 20, married, coal carman, of Upper Platt. The man, it appeared, was discharged from the Army in March 1915, on account of ill-health, after upwards of a hundred days’ service, and he had since tried to enlist, but had been rejected. He, however, received a calling-up notice on November 15th. It transpired that he was medically examined last August and passed for C1.

The Chairman: I think the military authorities must have made a mistake in calling him up.

Mr Collings: I know he was very eager to enter the Army.

It was stated that he suffered from fits and that he had two during the previous week.

Mr Collings: Since being discharged from the Army he has married, and his wife has had twins, I understand (laughter.)

Another member: He is a young father, only 20.

Mr Collings: I think we know more about the health of this young man than the medical board know.

Mr. Coote: If he is again sent into the Army he will be in hospital the greater part of his time. I think that in a case like this, we, as a Tribunal, ought to put our foot down and tell the medical board that we know what is the matter with this man if they do not know.

Applicant, replying to the chairman, said the doctors saw his discharge papers.

The Chairman: I think it is our duty to stop unfit men getting into the Army (hear, hear).

The Tribunal eventually resolved to grant six months, and the Clerk was directed to inform the military authorities of the facts of the case.