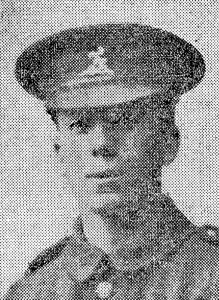 Invariably British involvement in the Great War focuses heavily on battles fought along the Western Front in France and Flanders; however, Britain and her Allies took part in many engagements around the world such as in East Africa or Salonika. Another of these campaigns occurred in Sinai and Palestine between 1915 and 1918. The fighting began when the German-led Ottoman (Turkish) Army invaded the Sinai Peninsula, which was then under the British Protectorate of Egypt, and unsuccessfully attacked the Suez Canal. As a result of this, the Egyptian Expeditionary Force was formed from men who had been in action at Gallipoli and now tasked with driving back the enemy through the Peninsula into Palestine. Several locals from Platt ended up in this part of the world, with two losing their lives. One of these was Thomas Bance from Crouch, a young labourer who had rushed to enlist in the early days of the war.

Thomas was born in 1896, one of four children of Thomas, a coal trimmer from Platt, and his wife Louisa (née Adams.) He grew up in Borough Green at Spencers Cottages on Station Road, and in 1902, when he was six years old, his father died. At the end of 1911, Louisa re-married to a local a mill hand named George Broad and the family went to live at Haxell’s Cottages in the Platt Brickfields.

After the outbreak of war, Thomas travelled to Tonbridge to enlist during late September 1914 and joined the 2/4th Battalion, The Queen’s Own (Royal West Kent Regiment) which was a territorial unit raised in the town earlier in the month. After a period spent training in Bedford, orders were received in early July 1915 for the battalion to proceed overseas. Equipment suited for a tropical climate was issued giving Thomas and his comrades (who included Louis William Hayes from Platt) a good indication that they wouldn’t be going to France, and were perhaps heading for the Mediterranean.

The battalion formed part of the 160th Brigade in the 53rd (Welsh) Division and tasked with reinforcing the Allied efforts in Gallipoli and taking the pressure off the Anzac position by landing in Suvla Bay.

Thomas entrained at Bedford with his unit on 18 July and left Devonport on board the SS Northland two days later. The voyage to Alexandria in Egypt took 11 days, and from there the ship immediately headed to Mudros, where it arrived on 8 August. The landings at Suvla had started on the 6th, and by the time Thomas came ashore at West Beach four days later, the battle had largely failed to achieve its objectives. Under constant shellfire, the battalion managed to get off the beach and made their way to where the front line was assumed to be only to discover that the trenches could barely be described as such, and in places were just shallow scrapes in the earth. In addition to the lack of cover, the ground in front of these ‘trenches’ was dotted with bushes that provided excellent cover for enemy snipers. Consequently, the whole experience was something of a baptism of fire for the new arrivals, who set to work straight away with improving their defences under the most testing of conditions.

Life for Thomas at Suvla would have been tough, and it was very likely that he would have fallen ill at some point. Even when in the ‘rear’, the battalion still found themselves within range of enemy artillery, and it must have been with some relief that they were withdrawn from the peninsula in December, at which point there were only about a dozen officers and 200 other men who could still be considered ‘effective’ soldiers.

Thomas spent his first Christmas overseas near Cairo and in the first four months of 1916 was based 62 miles southwest of the city at the Fayum oasis. At the end of May, the battalion moved to the Suez Canal and began a period of repairing and maintaining a long line of defences in anticipation of a Turkish attack, which eventually occurred further north at Romani. Thomas was sent with his unit north to Kantara to assist in the battle, however by the time they arrived the Turks had been repulsed, and the fighting was over. As 1916 drew to an end the battalion had come close to, but not engaged the enemy, however as 1917 began, the situation was about to change, with disastrous consequences for Thomas.

After the battle at Romani, the Turks were driven out of the Sinai Peninsula into southern Palestine. In February 1917 the West Kents marched to El Arish and eventually moved at the end of the month to Sheikh Zowaad, a Beduin town near the border with Gaza. In March they had reached Rafah in Palestine and subsequently took part in the First Battle of Gaza where, despite the enemy being outnumbered by two-to-one, the battle ended in stalemate with the British suffering about 4,000 casualties against approximately 2,400 Turkish losses.

In the middle of April, a second attempt at taking Gaza was launched with the battalion playing a defined role and began their advance during the evening of the 16th. At 8 am two days later, they attacked towards a hill southwest of Gaza known as Samson Ridge and immediately came under heavy enemy fire. Casualties quickly began to mount, and both flanks soon found themselves exposed. To compound matters, a tank attached to the battalion also broke down.

The situation began to improve when the 4th Royal Sussex, who had moved up from the support, fought valiantly forward along with the surviving members of Thomas’s unit, and eventually stormed the ridge. The tank was also sufficiently repaired enabling it to be brought back into action, and made considerable progress before being temporarily disabled again by armour-piercing bullets. The battalion fought and held the position until the 20th when they were relieved by the 158th Brigade. During the battle, battalion casualties numbered 38 men killed and over 150 wounded. Thomas was among the former, and his body was either never found or later identified. His commanding officer wrote to his mother:

Your son I regret to say was missing after the battle on April 19th, when the battalion attacked and captured Samson’s Ridge redoubt. I cannot get definite news of his being killed. Many men were buried at night, and should he have lost his identity disc by any chance he may have been buried without being recognised or there is just the bare possibility that he may have lost his way in the dark and gone towards the Turkish lines and been made prisoner, but I do not think this is likely and I am afraid I can hold out little hope of his being alive. Meanwhile until we know he must be considered as ‘missing.’ He showed great bravery on the day of the fight, and all ranks join with me in offering you our deep sympathy in the loss of so gallant a son.

Thomas is commemorated on the Jerusalem Memorial as well as the Platt War Memorial.