At 11:20 a.m. on 3 September 1939 a baby boy was born at Holly Mount Cottages in Platt and named Alan. Unknown to his parents, Aubrey & Alice Prentice, young Alan was the first baby born in Kent after war with Germany was declared 20 minutes earlier.

The possibility of another war had been on the minds of locals for some time, and with technological advances in flight, the parish council had discussed precautions that were to be taken in the event of an air raid as early as September 1936, and by 1938 the village had appointed its own Air Raid Warden. 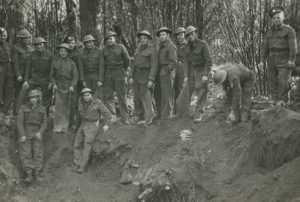 In late spring 1940, after the ‘phoney war’ had passed, life for the inhabitants of Platt began to change when enemy bombs began falling on the parish, with many landing on farms, fields and in surrounding woodland. Wrotham Heath golf course was hit along with Comp and Highland Farms. At the latter, a bomb narrowly missed a pigsty containing 100 pigs, whilst in Valley Wood an explosion in a large pond, near the golf course, left it permanently without water.

It wasn’t just bombs that dropped on Platt. People and aircraft also fell from the sky. On one occasion a German pilot was discovered hanging in a tree near the fourth tee on the golf course whilst, in another incident, the owners of Highland Farm came across several enemy airmen who had all bailed out, including one who had landed in an apple tree. According to his brother David, Leonard Hollebon, who lived in Platt, returned home one evening proudly clutching a German aircraftman’s boot – complete with severed foot still inside! Barbara Roots (née Pucknell) and her friends dragged home an entire German parachute, only to receive a dressing down shortly afterwards by a member of the Military Police, who had spotted it in her front garden. Much to the delight of local children, a Polish pilot landed his plane on the golf course, whereupon he was taken to the club house for refreshments whilst the Army removed his aircraft (to the children’s disappointment.) 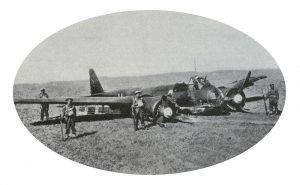 During the 1960s Margaret Ashdown, of 4 Whatcote Cottages, recounted a story about a German bomber that crashed between Borough Green and St. Mary’s Platt. Shortly after the plane came down the local policeman arrived and found that the crew had been killed in the crash. The policeman’s wife (the aforementioned Mrs Ashdown) was born in Germany, and hailed from Bavaria. She was drawn into the affair, because she was German speaking, and was tasked with examining the crew’s documents in order to find out who they were. Much to her surprise she discovered that, by a very remarkable coincidence, she had in fact, at one time, lived in the same building in Germany as one of the deceased pilots, and knew of him and his family. Margaret subsequently took it upon herself to write to the relatives of the pilot a letter of explanation of the circumstances of his death, and to offer her condolences through the auspices of the Red Cross.

A reply was eventually received, however to her astonishment, it seemed that the main concern of the deceased’s relatives was that he had once owned an expensive pair of Zeiss binoculars, and they thought that he would have been carrying them on his person during the raid. The important question they were asking was: “What had happened to his binoculars?” 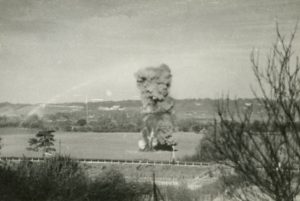 During the Battle of Britain dogfights between Allied and German planes spiraled across the skies over Platt, and it was not unusual for showers of spent bullet casings to rain down on the parish from overhead. John ‘Boy’ Bowen remembers sitting on the bench at the war memorial and watching these aerial combats, and was once forced to take cover under a large pear tree that was situated across from the Hall, whilst bullets bounced off the Maidstone Road. Barbara Roots also found herself caught in a hailstorm of brass whilst playing with her friends near Pine View, and was swiftly ordered to take cover by her father. Both residents vividly recall the ‘tinkle tinkle’ sound made by the ammunition as it hit hard surfaces, however no locals appear to have been injured by such an occurrence.

Local defences against enemy aircraft included a huge barrage balloon, which was sited almost exactly where the new Platt Memorial Hall stands and reputedly the size of several gardens, and also a Royal Artillery searchlight battery, that was placed in Borough Green.

In September 1940 the church was rocked by explosions on two occasions, the first damaged the windows, whilst the second hit the light over the door. However, the destruction was relatively light in comparison to events in Wrotham Heath during the same period. 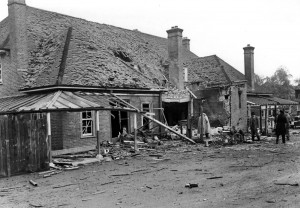 By far the worse bombing raid on the parish in terms of casualties occurred during the evening of 15 October 1940 when a stick of sixteen high explosives were dropped over Wrotham Heath by a raid returning to Germany from London.

In the Royal Oak pub, around 21:37 hrs, whilst a darts match was in progress and other customers were drinking in the bar, a bomb penetrated the roof and exploded in the kitchen. The blast tore through the building, throwing people backwards and showering them with glass and splinters from the bomb. Other explosives detonated on the road outside and damaged several properties including the tea-rooms (now Mings), a filling station and also lighting a gas pipe. Wrotham Heath Place was also hit causing a great deal of damage. Eleven people died as a result of the raid and amazingly, despite the destruction, the pub re-opened for business the following day, serving drinks from the saloon bar whilst workmen cleared away the wreckage. Read more about the bombing of Wrotham Heath here…. 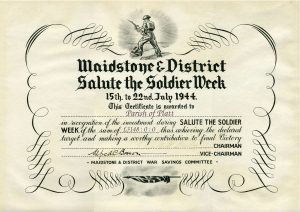 Residents of Platt were active in a number of schemes to aid the war effort. The Women’s Institute knitted garments for the Merchant Service and had a stall that raised money for the Red Cross and POWs. The production of food was of utmost importance, and the people of Platt played their part by cultivating their allotments and cottage gardens. Allotment holders in particular were encouraged to take up ‘stern measures’ to protect their plots from trespass, damage or theft. The Women’s Land Army, who were headquartered at Great Comp, worked the fields whilst the men were fighting overseas.

Other ways of supporting the war effort were through scrap metal drives (not hugely successful based on the Parish Council minutes) and cash collections made during ‘Wings for Victory’, ‘Warships’ and ‘Salute the Soldier’ weeks with the former raising £5752 in 1943 (around £244,000 in 2015 using the Bank of England inflation calculator) and £3148 (£129k) for the latter in 1944.

In addition to the Platt Home Guard, the Regular Army were based in the area at various times throughout the war. For example, between 1942-3, 506 Coy. Royal Army Service Corps (43rd Division) were billeted at ‘Holmes’ on Potash Lane. Another camp was situated at Warren Wood in Wrotham Heath, near to where ammunition was stored in the woods. The old school was requisitioned by the Army as a recreation room for the troops stationed in this district, whilst Hester McInnes of Huntsman’s Lodge, ran a soup kitchen for army lorry drivers out of her garage.

Troops passing through the villages in convoys would sometimes park up alongside the roadside for the night, often on the green beside Pine View that would later become a row of bungalows. Barbara Roots recalls that on these occasions an army sergeant would knock at the doors of residents living in the cul-de-sac and demand that so many men would bath in each house that night. By way of thanks the soldiers would leave tins of corned beef or powdered egg for the inhabitants of the homes that were able to help out. Later in the war, American GI’s began travelling along the road towards the channel ports, and if in the area for any length of time, would ask the children if they had any older sisters, and if so, would offer them sweets if they could set up a ‘date.’ 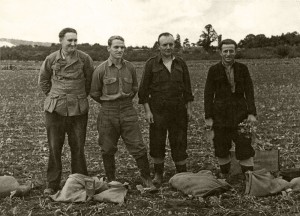 American and Commonwealth soldiers were not the only foreign visitors to the parish. A prisoner-of-war camp was established on the site now occupied by Wrotham School, and the inmates were regularly drafted in to work on the farms and help with the harvest etc. On Sunday mornings they were required to attend church alongside the locals, who were by all accounts largely sympathetic to these young men, who in most cases had not wanted to go to war, and had no intention of returning to it. A group of four Germans even befriended a small group of Platt children and, under supervision, played with them and helping build a sledge in the winter. By and large it appears that the Germans were tolerated in the community with several staying behind after the war and marrying girls from Borough Green.

Whilst the German POW’s appear to have been able to live alongside their captors without causing much in the way of fuss or distress, the same could apparently not be said for the small number of Italian prisoners who found themselves interned at the camp. It was recalled that some spat at locals, and would reputedly lash out at children with sticks that they picked up off the ground. 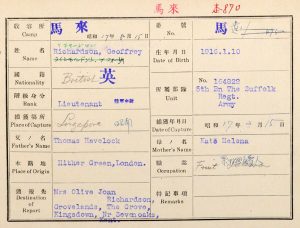 Leonard Harmsworth, who lived at Walnut Tree Cottage in Wrotham Heath, had been taken prisoner whilst serving with the Seaforth Highlanders in 1940. He was captured at St. Valery and spent five years working in a sugarbeet factory in Poland as well as building prison camps for Russian prisoners. By the spring of 1945 Leonard had been taken into Germany and had marched over 1000 miles through some of the hardest winter conditions. Along with a friend he managed to escape and lived off the land for five days before being pointed in the direction of the Americans by a group of German soldiers hiding in woodland.

Lieutenant Geoffrey Richardson of the Suffolk Regiment was captured by the Japanese in Singapore during January 1942. His parents lived at Pinehurst in Platt. 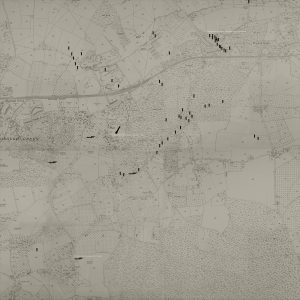 During mid-June 1944, and with the Allied invasion still in its infancy, the Germans retaliated by sending V1 ‘Doodlebug’ Rockets over to England. The first air raid in Platt relating to this new menace came on 16 June, with four warnings occurring between 9:00 a.m. and 1:55 p.m. ‘Bomb Alley’, as large areas of Kent became known, suffered heavily from flying bombs throughout the summer of 1944. Barbara Roots, who remembered the more conventional bombing at the start of the war, recalled that this new menace was considerably more terrifying, with ‘everyone holding their breaths, waiting to hear if the drone of the engine would stop, or continue onwards to somewhere else.’ The fourth V1 flying bomb (doodlebug) to be launched from France landed in Platt during the early hours of 13 June 1944 and landed in the garden of a large house, where it made a “terrible mess of a row of greenhouses.” Others landed on Stonehouse Farm, which was owned by Mr Bacon, and scattered debris over a five-acre area, and at a property on Crouch Lane. David Hollebon remembers seeing a doodlebug narrowly missing the church tower which was probably the rocket that landed on Pigeon’s Green. 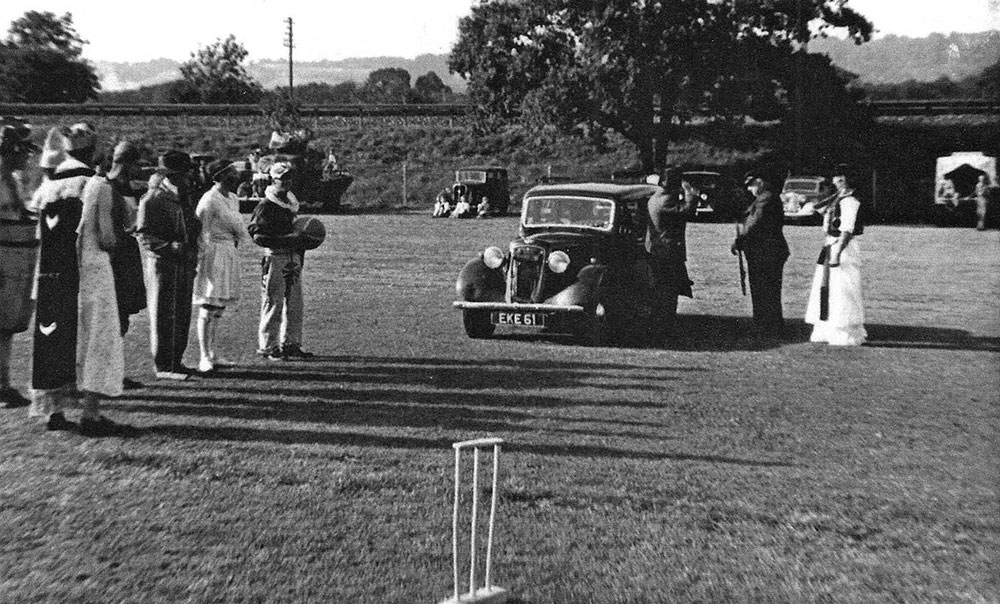 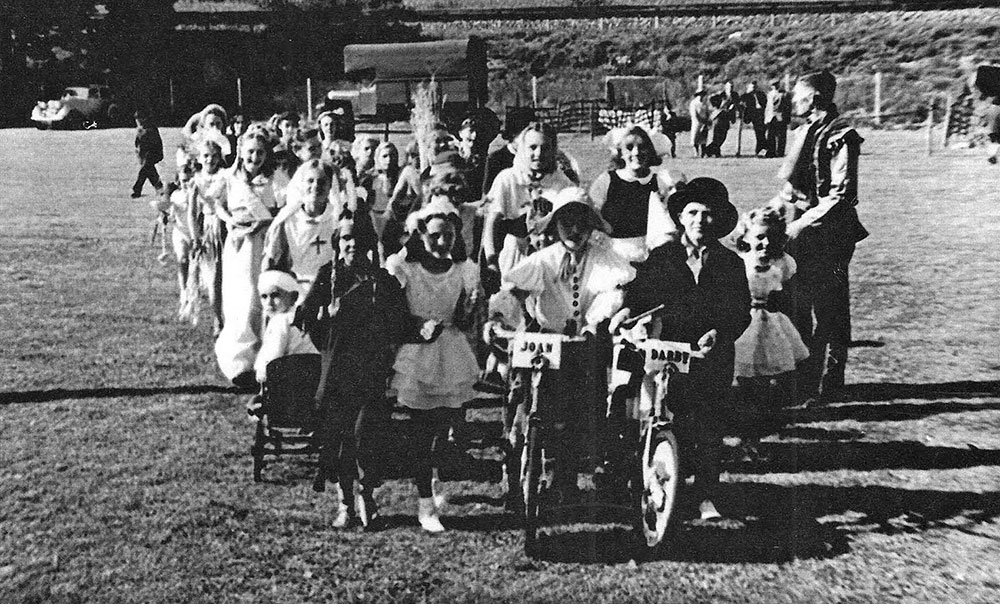 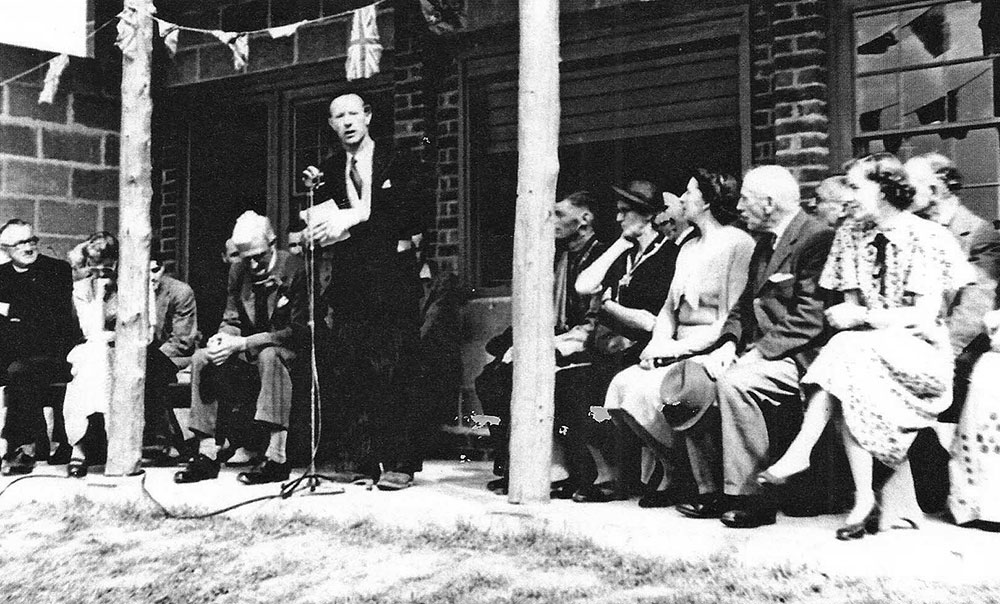