The following article was written by Carine Cadby and illustrated with photographs by her husband William. The Cadbys lived in the house at the top of Platt Common, known at that time as Platt Cottage but now Platt Common House. It was published in Country Life on Saturday December 2nd 1916. 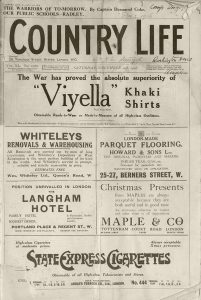 It is a pine wood of exceptional beauty in the very heart of Kent, and it is going to play its part in the war. It is those who live near it, for they have loved it ever since they can remember, when as children they used to play in it and collect the cones. Sometimes in jest it has been suggested to them, “Supposing the wood were cut down,” and they have answered that they could not live without it, feeling all the time a happy conviction that they would never have to face such a tragedy. 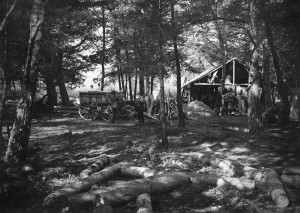 And now it has happened.  Their wood is being cut down.  Every day trees fall, and by the end of each week the bare gap grows bigger.  Yet no word of complaint has been heard.  Forgotten are all extravagant threats, and those who were most emphatic go and watch the work of destruction.  They see the trees which have been their pride and joy come crashing to the ground and feel the wind caused by their fall blow over their faces, and they are quite silent, they have given so much more than trees, and what is a wood compared with other sacrifices. It is enough to know the trees will go straight to France, and not so long after they have fallen their wood will make trench props and sleepers for those light railways just behind the front. These tall pines have been bought by the Government, and are being prepared for their work here on the spot. They will not leave the wood till they arc ready to be used, and so a shed has been built right among the trees.  It reminds one of those little sawmills in Switzerland which would suddenly appear right in the heart of the forest.  This shed has been put up by a builder who has made use of natural material as far as pos­sible. All the corner posts are trees, so that there is nothing incongruous about it, and the shed fits into its surroundings as if it had grown there. At one end is the engine, and in the middle the big round saw revolves with its siren-like scream.  Through this busy saw the logs pass and are cut into balks. Slowly they travel along, guided by three men, while a boy hammers in wedges to help the saw.   “It is the worst wood for sawing,” says the foreman.  It binds continually, and has more knots than oak or chestnut.  But though it jibs now and again, man’s will is strong and the saw’s teeth are sharp, and it is forced to yield.

On one side of the shed things still look primitive and natural. It is the south side, and the sun still shines on a. peaceful sylvan scene.  Some of the trees of irregular growth arc still standing, and those felled lie about ” looking like-dead giants.” said a sentimentalist; but the practical person views them as live recruits waiting for the training which is to fit them to serve their country. 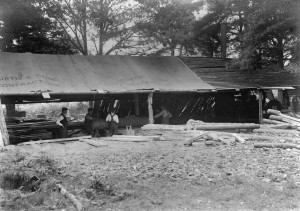 There is already the grim shadow of war over the other side of the shed, and it begins to look ugly and practical.  There are big stacks of balks for trench props-and those of larger size for sleepers, and there are also symmetrical heaps of branches cut into regular lengths and thickness.  These inno­cent-looking, loads are for the con­struction of wire entanglements.  Close to the-saw itself is a high mound of sawdust, and even this is connected with the war, for it is sold to the Government for the making of pine dressings for the wounded. 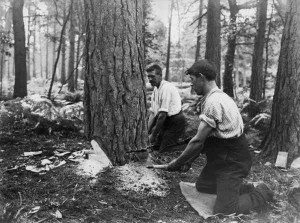 The staccato sing of the saw guides one to the place where a tree is being cut.  Two men are intent on this business, both muscular, sturdy looking fellows, starred by the Government to do the work for which their training has fitted them. But one of them must be active and agile as well as strong, for he has to climb the tree and fix a rope on to its branches which will guide it in its fall.

When the tree is down, and its branches are lopped off, it is harnessed to Bessie and dragged to the shed. Bessie is the mare with an almost human intelligence.  She studies her route, gauges distances, allowing   for obstacles, and very rarely   does she get hung up with her load.  When, in spite of her care, this does happen she twists her head round as far as it will go to investigate, and then patiently waits for her driver’s help.

At first she drew the trunks along as they were, but the peaty ground with its thick carpet of pine needles made heavy going, so now the trees are cross-sawn into lengths and bound to­gether into loads.  These Bessie draws on a sled, and it is another touch of Switzer­land in this Kentish wood.

The character of the wood is changed, too, in these days of changes.  It has lost much of its aloofness and, like society, become more demo­cratic.  The village children, who used only to play near the footpaths, now stray right into its heart.  They come with empty bags, sacks and creaking perambulators, and they go away bearing heavy loads.   Old village women, too, with backs bent to fit huge bundles come and carry away dead wood.    It is the young and the old who come for this wreckage.  With coal at its present price they are only too glad to be allowed this gleaning.  Some of them are getting in a store, and these chips and bits of bark will be a help in the coming colder weather. 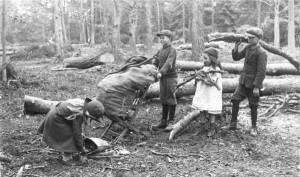 The old woodreeve who used to guard the wood so jealously is changed too.  He is no longer the terror of the small children; now they pass him boldly, and he seems not to see them. The wood is no more his chief concern.  He cannot now give it all his thoughts, for some of them are with his only son, fighting in the trenches out in France. “Where else should a young man be?” he asks bravely; but he has aged since the Big Push began.  He bore the felling of the first tree like actual physical pain, and his face was set and white when it came crashing down; but now he knows there are worse things than killing trees, and though he still winces at the sound of their fall, his heart is less heavy over that than when he hears the distant booming guns in Flanders.