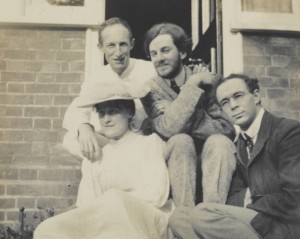 ‘Finding a Fairy’ was written by Carine Cadby and first published during 1917 by Mills & Boon. Carine, whose full name was Katharine Mary Simpson Cadby (née Stevenson), was a successful photographer of flowers during the early twentieth century and had written extensively for the photographic journals. Along with her husband ‘Willie’, who was a professional photographer for Cooks the travel agents, she was a member of The Linked Ring Brotherhood, a photographic society created to propose and defend that photography was as much an art as it was a science.

William Arthur Cadby, who shot all the photographs for the book, was best-known for his photographs of the Bernese Oberland in Switzerland and also his sympathetic portrayals of childhood. He was born in Hampstead during 1864 and was the son of a pianoforte maker. Carine was from Brighton and the daughter of a captain in the 9th Lancers. It seems likely William met Carine in London, and they married at St. Peter’s Parish Church in Regent Square on 21 April 1894.

Before to moving to Platt in 1900, the Cadbys lived in Reculver on the North Kent coast, and on arrival in the village took up residence in a property now called Platt Common House, but known at that time as Platt Cottage (later Ruffway.) The house, situated at the top end of Platt Common, was right next to Platt Woods, which became the location for many of the photographs in the book. 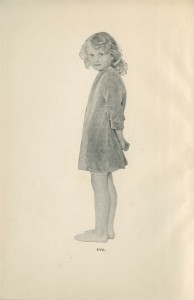 ‘Finding a Fairy’ also featured a number of local people, with the main character, a little girl named ‘Eve’, being played by Pernel, the daughter of Henry Wilson, a sculptor, jeweller and architect who lived at The Thatched House, and who would eventually give H G Murphy (designer of the Platt War Memorial plaques) an apprenticeship at his studio. Pernel herself would later go on to find fame as a celebrated violinist called Orrea Pernel. Her older brother Guthlac (who would become a civil engineer and supervise the building of the Royal Festival Hall in London) was ‘Gabriel’, and ‘Tip’ the dog was the Cadby’s dog ‘Bella’. Also making an appearance was Mr. Pearson, who was photographed in his village shop, whilst the other girls were Mary Curtis, Queenie Higgins, and Sadie Ladd.

Finding a Fairy’ is a charming book of fantasy and childhood. Mrs. Carine Cadby tells a pleasant tale of a little girl who lived near a wood in which all sorts of pretty and wonderful things happened. The story is illustrated with photographs by Mr. Will Cadby, who has been wonderfully successful in catching not only the grace of children, but bird life and the beauty of woodland scenery.

Coincidentally the Cadby’s ‘fairy’ book was published the same year as the first photographs of the more widely known Cottingley Fairies were taken, however, unlike those, the Cadby’s don’t appear to have ever suggested that their images were authentic!

Carine published several more books after the war and in 1919 she became the first President of the Platt Women’s Institute, which started life as a Red Cross working group that met at Platt Cottage and made surgical supplies such as padded splints, swabs, bandages etc. for the wounded.

The Cadby’s lived in Platt until the 1920s when they moved to Dorset. William died in Shaftesbury during 1937 and Carine twenty-years later in 1957.

We have reproduced the photographs from the book below. More writing and photographs by the Cadbys can be seen in an article from 1916 entitled ‘A Pine Wood For The Front.‘