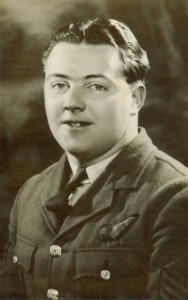 Leslie Bertie Neaves was born in Platt on 23 August 1924, the son of Bertie Neaves, a local brick maker and his wife, Bertha Hodges. The family lived near the brickworks at 2 Holly Mount, and on 30 September 1929, aged five, Leslie started at Platt School. He was a pupil there until 25 August 1933 when he transferred to Borough Green, where the older children usually went.

On the outbreak of war, Leslie’s father, who was a veteran of the First World War, re-enlisted the Army and saw service with the Royal Observer Corps. Leslie joined to the Royal Air Force and found himself assigned to 463 Squadron – a heavy bomber unit equipped with Avro Lancaster bombers, with whom he eventually rose to the rank of sergeant.

In early 1945 the squadron flew operations against targets in Germany, as well as providing support to advancing ground troops. Leslie was a bomb aimer, and on 20 March 1945 his plane took off at 23:49 hours from RAF Waddington to carry out a raid on a German petrochemical refinery. During the night his plane was shot down with all seven crew members were killed and eventually buried in the Berlin 1939-45 War Cemetery.

Curiously, although Leslie lived his entire life in Platt, his name was not added to the local war memorial in 1946 but was added to a new plaque commissioned in 2016 and can also be seen in the Book of Remembrance in the RAF Chapel in Lincoln Cathedral.