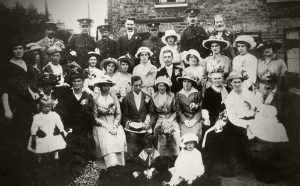 Charles Edgar Rootsey (top row, 3rd left) was born on 19 February 1874 at 4 Balmoral Grove on the Caledonian Road in London. He was the son of a butcher named George James Rootsey and Eliza Jane Blake. In 1897 Charles Married Lydia Harriet Chitty in St Pancras and by 1911 they were living with their three children at the house of Emily Anne Scroggie in Finsbury Park. Lydia was Emily’s servant whilst Charles was working on his own account as a window cleaner.

During the Great War Charles fought in Gallipoli and Palestine with the Essex Battalion, and suffered from shell shock as a result of his experiences.

In the 1918 electoral rolls Charles and Lydia are recorded as living at 73 Dutton Street in Greenwich and 59 Courthill Road in Lewisham in 1927. At the outbreak of war in 1939, when Charles was working as a milkman, the Rootseys were living at 136 Mount Pleasant Road in Lewisham, however by the autumn of 1940 they had left London to escape the bombing, and were boarding at Rhette, a section of Wrotham Heath House that had been partitioned off in the 1930’s. During the bombing of Wrotham Heath Charles became trapped under rubble with James Thomas Edward Clayson and died of his injuries.