William Unicume was born in Cranbrook, Kent on Christmas Day 1886. He was the eldest child of a local farmer, also named William, and Josephine Collins. By 1901 William had left home and was boarding at the Platt Stores and working as a grocer’s apprentice for Reginald Pearson. After serving his apprenticeship he opened up his own store in Collier Street near Marden, and in 1910 married an Agnes Finn. The couple never had any children and continued to run their grocery business together until 1916 when William was called up and enlisted in the Army on 24 February. Having passed his medical examination William was then sent to the Army Reserve, and wasn’t mobilized until 31 May 1918.

39087 Pte. W Unicume was posted to the 10th (Kent County) Battalion, Royal West Kent Regiment and proceeded overseas to join the British Expeditionary Force on 24 September. He was probably involved in the final advance into Flanders and following the Armistice, was transferred to the 6th Royal West Kents.

By the start of the Second World War, William had spent several years living in Horam, East Sussex and running a hairdressing business. He joined the Home Guard (Dad’s Army) and served with the 20th Sussex (Hailsham) Battalion. 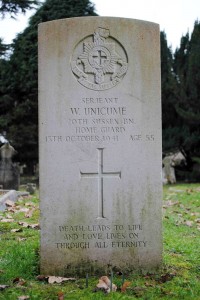 On 12 October 1941 whilst being given an instructional demonstration at Horam brickworks by the Royal Engineers, William was killed when a bomb prematurely exploded as it was discharged from a mortar. In addition to William, a number of men were also injured including a major-general, a captain, army engineers and four Home Guards. He was taken to the Kent & Sussex Hospital in Tunbridge Wells, but died the next day from his wounds.

William’s funeral was held at St. Mary’s Platt church on Friday 17 October and he is buried in the churchyard.