Margaret Olive Hodgson was born on 7 October 1893 in Sandwich, Kent. She was the eldest daughter of the Rev. Francis Douglas Hodgson and Margaret Hassall. In 1901, when Margaret was seven, she was living with her parents and three younger siblings at Cheriton Rectory in Kent and at Worth Vicarage in Eastry ten years later in 1911. The family had grown to nine children and Margaret had found work as a bank clerk in the National Provincial Bank. In WW1 Margaret’s younger brother Cyril was killed during 1917 in Mesopotamia. The family lived in Worth for nineteen years before moving to Worth Cottage, Beacon Road, Broadstairs in 1920. 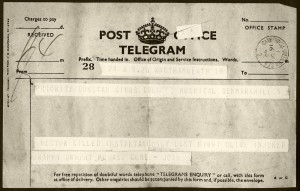 It is not known when Margaret first came to the parish, however she was a companion to Edith Rose Dunstan, mother of Hester Muriel McInnes, and generally known as ‘Olive’. She lived at Wrotham Heath House with Edith, and was injured during the bombing of 15 October 1940, but died two days later at Preston Hall Emergency Hospital.

Margaret’s name was added to the Platt War Memorial in 2016.