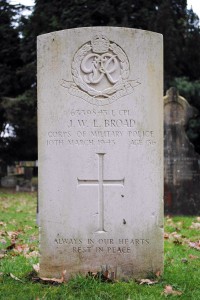 John Walter Leonard Broad was born on 30 October 1906 in Platt, the son of a farm labourer named John Leonard Broad, and his wife, Louisa Ellen Fisher. In 1911 the family were living at Sotts Hole near Crouch, with John starting at Platt School on 11 March 1912.

In his adult life John worked as a gardener and on 5 October 1935 he married a local girl from Mill Cottages named Doris Isobel Gibson in Platt Church. They subsequently had two daughters born in 1936 and 1937. During WWII John served with the Corps of Military Police (No. 6339843) and had gained the rank of lance corporal when he died at Sevenoaks and Holmesdale Hospital in Sevenoaks on 10 March 1943. He had been suffering from acute nephritis (inflammation of the kidneys) and was usually resident at 7 Pine View Cottages in Platt.

John’s was buried in the churchyard three days later and is one of four Commonwealth War Graves in Platt.