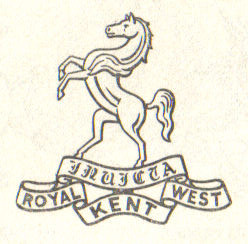 Thomas Terry was born in Platt on 21 April 1895, the eldest of four children of Percy, a railway worker, and his wife, Emily Ada Clarke. By 1901 the family had moved to Windmill Hill in Wrotham Heath with Thomas attending Platt School. Percy’s job temporarily took the family away to Ponders End in Middlesex, where, in 1911, both father and son were working on the railway, however by the time war broke out the family were back in Platt living at 9 Whatcote Cottages.

Thomas was among the first from the parish to sign up, enlisting with his friend Joel Piper from Crouch in Maidstone on 9 September 1914. He joined the 8th (Service) Battalion, The Queen’s Own (Royal West Kent Regiment) and in a medical examination carried out at the time he was recorded as being 5’ 6” tall, 130lbs in weight, and had a 36″ chest.

Thomas underwent training at Shoreham-on-Sea and then Blackdown before he was sent with his unit to France on 30 August 1915. When he eventually arrived at the front in early September, preparations for the coming offensive at Loos by the First Army were well underway, with The Queen’s Own incorporated as part of the attacking force.

The battalion spent the first three weeks of September encamped near Montreuil, utilising their time with field-firing practice and engaging in divisional exercises. Thomas began the four-day march to the battle zone on the 21st, laboriously trudging overnight along what were congested and chaotic roads full of military transport and men.

The offensive began on the 25th; however, the battalion, who had had little water or food, and were sleep-deprived, found themselves scheduled to go into action at dawn on the following day. The ground over which they were to attack sloped gently downwards to the Lens-La Bassée road, before gradually rising the other side towards a rearward system of wire and trenches that ran from east of Hulloch to the outskirts of Lens.

At zero hour the battalion advanced on the left of the leading line, with the 8th Queen’s in support and 9th East Surreys on their right. At first, they made good progress and moved forward at a steady pace – albeit under heavy artillery and rifle fire, which as they proceeded, was added to on their flanks by a hail of lead from machine-guns.

Upon reaching the road, the West Kents pushed on, crossing the enemy advance trenches (which were full of dead Germans), and then upwards towards the enemy wire. Bullets from machine guns swept across the landscape in front of them and men from the battalion began to fall like matchsticks in the wind, with any survivors who managed to reach the German line discovering to their horror that the preceding British artillery bombardment had been entirely ineffective, and the wire remained intact. The situation was desperate, and several valiant attempts to get through the enemy defences failed. Those who were able fell to the ground for cover and tried their best to extricate themselves from the battlefield.

Of 24 officers and 800 men who had gone into action that morning, only one officer and 250 men remained. Along with Joel Piper, Thomas was among the 800, and like hundreds of others, his body was either never recovered, or later identified

Thomas is commemorated on the Loos Memorial as well as the Platt War Memorial.