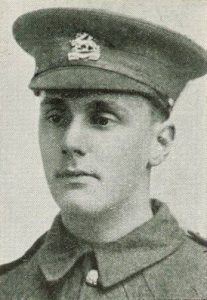 Edward West was born in Platt on 28 April 1896, the first of three children of Arthur Charles West, a flour miller’s clerk from Pangbourne, and his wife, Clara Dann. In 1901 the West family lived on Godstone Road (now Maidstone Road), probably at Mill House or in Mill Cottages, and Arthur worked for his uncle Frank West, who ran Platt Mill. Although he lived in Kent, Arthur retained strong ties to his hometown in Berkshire, where the Wests were among the oldest inhabitants, as Edward and his younger brother William were both christened there, and not locally in Platt.

When old enough, both boys were sent away to boarding school in Herne Bay at a college run by a Eustace Turner (an Oxford graduate) who had inherited it from his parents. It also appears that Edward’s sister Mary may have been privately educated too as she does not appear on the registers for Platt School.

By the summer of 1914 Edward’s family had returned to Pangbourne and were living near the River Pang at Mill House, an old Georgian property built in the early eighteenth century. Based on his service number, Edward enlisted in Reading on 26 August 1914 and joined the 5th (Service) Battalion, Princess Charlotte of Wales’s (Royal Berkshire Regiment), which was one of many new battalions formed after Lord Kitchener’s national appeal for volunteers. Initially based at Shorncliffe, the recruits moved to Folkestone in January 1915, and onwards to Malplaquet Barracks in Aldershot in February, where they formed part of 35th Brigade, 12th Division.

During the evening of 30 May, the battalion entrained in Aldershot for Folkestone and sailed for Boulogne where they arrived in the early hours of the following day. Following a period of training in Armentières, Edward’s unit moved to the Ploegsteert (known as Plugstreet by the troops) sector in mid-June, where they experienced their first taste of trench warfare. For the remainder of the summer, the Berkshires found themselves alternating between the front and reserve lines and at the Battle of Loos were employed in diversionary tactics some distance north of the battlefield.

On 13 October, Edward went into action when the Berkshires took part in an assault on the Hohenzollern Redoubt and captured Gun Trench and the southwestern face of the Hulluch Quarries. Battalion casualties that day numbered 149, with almost 60 killed or missing, and others dying of wounds in the following days. Edward survived the assault, and by Christmas was based in the Béthune area.

On 19 January 1916, the battalion began a period of training in ‘Open Warfare’ at Busnes, before returning to the Loos sector on the 12 February, and eventually based in trenches just south of Auchy by the end of March. On 1 April, while he was cleaning his rifle at the end of a sap (which was a short trench running into No Man’s Land from the front line used as a listening post), Edward was shot through the head by a sniper and died instantly.

Lieutenant Edwards, who commanded Edward’s platoon, wrote to Mr & Mrs West that their son had ‘always done his duty cheerfully and without a grumble – often under very trying circumstances.’ Corporal R. F. Sparkes also wrote to Edward’s parents informing them that ‘he was respectfully buried by his comrades. We all feel deeply sorry, for he was a good soldier, and one we could ill afford to lose.’

Edward was just 19 when he died, and his body was taken away for burial in the British Cemetery at Vermelles. Shortly after his parents received the news, the bells in Pangbourne parish church rang out a muffled peal out of respect for their esteemed fellow bellringer, and in 1918 a brass tablet in memory of their son was posthumously erected in the church by Arthur and Clara.

Despite not having lived in Platt for some years, Edward still had relatives in the village, most notably his father’s aunt Mary, who was married to Percy Minter. After the war, Percy became a member of the War Memorial Executive Committee, and so it is probable that this connection resulted in Edward’s inclusion on the Platt War Memorial.