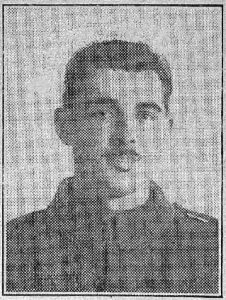 William Henry Rogers was born on Windmill Hill, Wrotham Heath during 1895, the son of Henry and Christina Rogers. His father was a farm worker, and he had a younger brother and three younger sisters. William attended Platt School and when old enough, joined his father labouring on a local farm. At some point, he married a lady called Lily, though it is unknown where or when the marriage occurred.

In the absence of surviving service papers, exactly when William joined the Army has been lost, however, based on the amount of war gratuity awarded after his death, it is likely he enlisted in Woolwich during August 1914 with the 2nd Rifle Brigade (Prince Consort’s Own.)

William was almost certainly at the front by the start of 1918 where, on 21 March, the German Army launched a series of attacks known as the Spring Offensive or Kaiserschlacht (Kaiser’s Battle.) Although making significant advances from the outset, by late April, and having suffered a considerable amount of casualties, any gains they had made were now precarious, and an Allied counter-attack in the summer would prove disastrous for the German Army.

At the time the offensive began, William’s unit was training in Tilques; however, they quickly mobilised the following day and marched to Arques where they entrained for Rosières-en-Santerre on the Somme. Upon arrival on the 23rd, the battalion marched to Chaulnes, before travelling by lorry to Morchain, where they opened out into artillery formation and advanced on Pargny. While crossing the high ground situated above the river, they came under heavy shell fire and managed to take over an area north of Pargny Bridge and to the south of Fontaine Les Pargny. Shortly before midnight, a German patrol succeeded in rushing the bridgehead, penetrating the British line. The Rifles successfully counter-attacked but lost five officers and 60 other ranks during the action.

At some point between the 23rd and 31st William was killed in action. The battalion had fought a furious rearguard action and ended the month southeast of Amiens near the village of Castell. His body was either never recovered or later identified and he is commemorated on the Pozières Memorial at Ovillers-la-Boiselle.

His family would remember him as a very loving and special man who would always be happy to accommodate people if they needed advice or help. In the years following the war, his relatives would take an active part in the annual Remembrance Day Ceremony held at the Platt War Memorial.