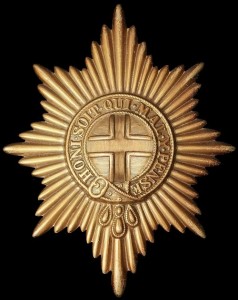 During the Great War, trench raids were a regular feature of life at the front. Occurring almost always at night, these temporary incursions into the enemy front line were designed to gather intelligence and, at best, return with a prisoner. Typically, they were carried out by small teams of men who, before the attack, blacked up their faces before crossing over No Man’s Land. Those from the ranks who took part in such actions were rarely volunteers, and consequently, with such a perilous endeavour, the chances of returning unscathed, or at all, were often quite slim. One Platt man who is known to have taken part in such a raid was a young private from Wrotham Heath named Alfred Luke Evans, who served with the Coldstream Guards.

When he was a few months old, Alfred (who was usually known by his middle name in adult life), was christened in St. Mary’s Platt church on 11 October 1891 – the first child of Luke Evans, a local farm labourer, and his wife, Eliza Ann Harryman. In 1901 Alfred’s parents appeared twice in the census and were enumerated in both Wrotham Heath and Kent Street near Mereworth. Alfred is only listed in the latter and recorded as attending school, which was presumably in Mereworth. By 1911 Alfred had left home and was boarding at Dukes Place Farm in West Peckham, where he worked as a waggoner’s mate.

Before the war, Alfred briefly returned to Wrotham Heath where he worked in the village shop, and on 16 November 1914, while living in Hodsall Street near Wrotham, he caught the train to Maidstone and enlisted with the Coldstream Guards. 13744 Pte. A L Evans spent the next year based in the UK before being sent to France on 18 November 1915 where he joined the 2nd Battalion. We do not know precisely when Alfred arrived with his new unit, and unfortunately the battalion War Diary during this period does not mention the arrival of new drafts, however at the time the 2nd Coldstream were billeted in Merville and like most new arrivals, Alfred probably spent upwards of a week training at an infantry base depot before joining his new unit in the field.

In early December the Coldstream had occupied trenches north of the village of Laventie, which is about six miles southwest of Armentières, but by Christmas had entered billets at La Gorgue. A letter published in the Hastings & St Leonards Observer in January 1916 authored by a Sergeant Jack Groombridge from Alfred’s battalion gives an account of a ‘Christmas Party at the Front’.

It was found advisable to hold the celebration on the 24th, as we were due back in the firing line the following day. Everything was done to ensure a good time. The festivities commenced at 12:30 p.m. and continued till 2 a.m. There was plenty to eat in the way of turkey, pork, beef, vegetables, salad etc. followed by fruit, biscuits and sweets. The Christmas pudding which followed reminded the boys of Old England. Cigars and cigarettes were distributed, and songs and recitations were contributed. A gramophone also rendered musical selections. During the dinner the officers paid a visit and drank to their health and future success. One incident that occurred that night I shall ever remember. During the noise and merriment one of our comrades called for order and asked for a moment’s reflection in honour of our departed comrades, who since the previous Christmas had died for their country’s honour. It was truly a touching moment. Everyone present rose in silence. Memories of the brave lads came back to us, and many eyes were dimmed with tears. The few minutes seemed like hours.

The following day Alfred’s unit went into trenches left of Vieille Chappelle at Pont du Hem, relieving the 1st Coldstream Guards and two months later, at the end of February 1916, the battalion left the Armentières sector and made their way to Calais where they underwent a period of training:

The time at Calais was very well spent. Units were taught how best to conduct an attack under modern conditions, and the instruction was based on the actual experiences gained during the Guards operation at Loos on the 27th September. Experiments with liquid fire showed that men could remain without injury when just hidden under the parapet of a trench, even if the jet of flame played upon it from a few yards distance. All ranks were made familiar with the use of live bombs, which had to be handled with care and knowledge, and whose mechanism had to be understood. The organization of bombing parties was worked out in detail to meet all possible contingencies, and a drill evolved to make every man acquainted with the part he had to take in these expeditions. When first introduced hand-grenades were not always too safe, some were of faulty construction, and several deplorable accidents occurred.

On 17 March the Guards Division moved to the Ypres Salient in Belgium, with the battalion initially entering dug-outs on the Canal Bank left of Ypres before taking over the line in front of St. Jean three days later. Almost immediately Alfred would have been exposed to heavy enemy shelling, and casualties were suffered from the outset. The trenches themselves were in poor condition, and often quite dilapidated and water-logged; consequently they offered scant protection from the continuous artillery bombardment, and in many places had to be entirely rebuilt under the most violent of conditions. This work was usually carried out at night due to the watchful eye of the German snipers and machine-gunners who made working in daylight too dangerous.

Alfred endured four months of trench warfare on the Ypres salient, which at times must have been incredibly stressful, however at the end of July, the battalion left Poperinghe and marched to Proven, where they entrained for St. Pol. The Coldstream had begun the journey to join the infamous Allied summer offensive on the Somme, and following a trip on one of the famous London buses that had been drafted overseas to transport the troops, they eventually found themselves at Bertrancourt on 11 August. Five days later Alfred was back in the line when his unit relieved the 12th King’s Liverpool Regiment in trenches opposite Serre. He would have noticed the deep and better class of earthworks that were possible in the chalk soil of Picardy, which were in complete contrast to the waterlogged defences in Flanders; but still, the rats were as abundant, and, in addition to the rodents, there was a plague of flies.

Due to the continuous heavy bombardments that had torn up the landscape, the whole of the terrain on which operations were to take place was now a wasteland, with buildings, trees, and other objects upon it almost completely obliterated. All landmarks had disappeared, and even villages that had once existed were no longer discernable and had become tumbled masses of brick that were only useful to mend the roads. There was nothing recognisable to guide a traveller to find his way to his destination. The ground was pitted with shell-holes, and passage across it was both laborious and challenging; with the only advantage being that there was plenty of shelter from enemy fire.

The Coldstream had arrived in a relatively quiet sector, and casualties were minimal during their first few weeks at the Somme, however, in mid-September, they were ordered to make an attack from Ginchy towards Les Boeufs. At 6: 30 am on 15 September, with the 3rd Coldstream on the left, and the 1st Battalion on the right, Alfred’s platoon began their advance, passing all the way through Ginchy Wood and meeting with heavy machine-gun and rifle fire on the other side. Men were mown down, and casualties were substantial, yet the battalion was able to secure their first objective before moving on later in the morning towards the second, which they reached under the strain of a heavy artillery barrage. Having consolidated their position, during the evening, the Coldstream fought off an enemy counter-attack and held the line until being relieved at dawn two-days later. Casualty figures for the 48 hours were estimated to be over 450 men from all ranks.

Alfred survived the assault, and in mid-November, while based in trenches near Les Boeufs, he became one of five men wounded on the 17th – receiving gunshot injuries to his arm, left thigh and hand. He was stretchered down the line to the Casualty Clearing Station and eventually found himself back in England on 30 November.

Alfred spent several months in a hospital recovering from his wounds, and when well enough, was sent back to the front – arriving in France on 6 May 1917. By June he had rejoined his unit on the Ypres Salient and would have been based in the Boesinghe Sector at the start of July. On the night of 8/9 July Alfred took part in a night raid over the Yser Canal and was killed in the attack, which despite several casualties, was deemed a success. His body was buried in the Artillery Wood Cemetery near Boesinghe.