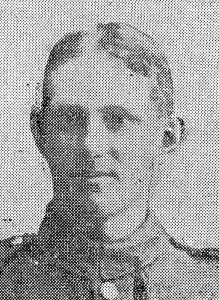 George Lacey was born on 18 January 1898 in Kingsdown, Kent – the third of seven children to John Lacey, a farmer from Ightham and his wife Ellen Godfrey, who was from Edenbridge.

In 1901 the family were living at Brands Hatch, however, by 1909 they had moved to Platt, where George and two of his siblings attended Platt School (they were previously at Horton Kirby School.) In 1911 the family were living near Crouch at Paxton Cottage, and George was working at Platt Farm for a fruit farmer named Norman King-Smith.

On 28 February 1917, shortly after turning 19, George visited the recruiting office in Maidstone and enlisted in the Army. He joined the 1st Battalion, East Surrey Regiment as 33558 Pte. G Lacey, and was sent for training.

George was posted to France in May that year and probably joined his battalion in Roclincourt towards the end of the month. The first half of June was spent training as well as labouring in working parties, with an eventual move back up into the line near Farbus Wood occurring on the 14th. At the start of July, the battalion took over trenches north of Arleux from the 1st Devons, and by the 20th were based northwest of Arras at Oppy Wood.

The next few days saw intermittent enemy shelling with the men witnessing frequent sorties by aircraft from both sides overhead. Just after dark on 25 July an enemy patrol approached the British position and swiftly driven off but followed shortly afterwards by another more substantial attack which consisted of mortar fire from Oppy Ruins. Seven men from the battalion, including George, were wounded and he died of his injuries three days later.

George’s body was eventually buried about 5 miles to the west of Arras at Duisans British Cemetery in Etrun, and his headstone was inscribed ‘In Memory of Our Darling Boy RIP’