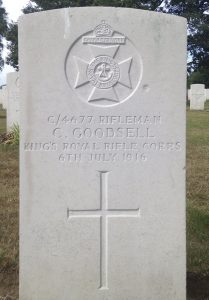 Cecil Goodsell was born in Hawkhurst during October 1895, the third of nine children to James Goodsell and his wife, Harriett Saunders. His father was a farm bailiff meaning he was a middle-man between the landowner and the tenant farmer – acting as an agent for the former and making sure the latter ran the farm correctly and paid the rent on time. If not, the bailiff had the power to evict the farmer. As such James moved around a bit and was enumerated in various places during the decennial census returns. In 1901 the family lived in Hale in the parish of Horsmonden, but by 1911 had moved to Goblands in Hadlow. Cecil had started work labouring on the farm, and within the next five years had relocated with his parents and siblings to Ford Farm in Wrotham Heath.

At the time of enlisting Cecil was living near Dartford in Southfleet and presumably working on a farm in the area. On 22 November 1915, he visited the recruiting office in St. Swithin’s Lane, London and joined the 19th (Reserve) Battalion, King’s Royal Rifle Corps.  At the time he was recorded in an Army medical as being 5’ 7” in height, weighing 128lbs, with good physical development, passed fit for service and sent for training in Andover.

On 28 January 1916, Cecil was transferred to the 17th (Service) Battalion (British Empire League) King’s Royal Rifle Corps who were camped in Witley, Surrey, and formed part of the 117th Infantry Brigade in the 39th Division. Towards the end of February, the Division began departing for France with Cecil’s unit entraining at Milford on 7 March for Southampton where they sailed for Le Havre on board the SS Princess Victoria. Upon arrival in the small hours of the following day, the battalion made their way to Steenbecque, where the brigade was concentrated, before eventually marching off towards Estaires and then Bac St. Maur.

During the evening of 20 March, the riflemen took over the front line at Rue du Quesnoy but within a month, Cecil was taken out of the trenches suffering from scabies. This was a common affliction amongst men serving at the front, and he was admitted to the Scabies Hospital in Colonne before being transferred to No.4 Stationary Hospital in Arques to recover. Cecil was eventually discharged back to duty on 15 April and rejoined his unit at Béthune after they returned from a short tour in the trenches at Cuinchy.

Towards the end of April, Cecil returned to the front lines, this time in the Festubert area, where the battalion remained until mid-July. At the time the Somme offensive started on 1 July, he was based in trenches south of Richebourg known as Richmond Terrace and formed part of a wiring party that ventured out into No Man’s Land during the night of 5/6 July. The battalion War Diary makes mention of enemy snipers being quite active in this period, and it seems likely that Cecil was shot and killed while working on the wire. His body lay where it fell until 1920 when it was exhumed and reburied with military honours in Le Touret Military Cemetery near Richebourg-L’Avoue. Cecil’s personal effects and medals (British War and Victory) were subsequently sent to his mother, who by 1918 had lost another son to the war, and was living in Crouch.

Cecil’s name was added to the Platt War Memorial in 2016.