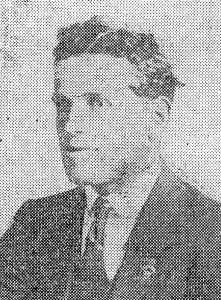 William Leslie Neaves was born in Charing, Kent on 26 June 1894. He was of eight children of Henry Neaves and his wife, Charlotte Stroude. In 1901 the family lived in Rye, however by the following year they had moved to Platt and were living in the Brickfields. William and two siblings joined Platt School in late August 1902, after which he worked for Vickers and Company in Erith.

William enlisted in the Army at Bexleyheath around April 1917, and in September, following a period of training, was sent to join the 1st Battalion, East Surrey Regiment in France, and probably part of a draft that arrived with the battalion at Penin later that month.

On 25 September the battalion moved by rail and road to Nort-Leulinghem where they engaged in a short period of training. Rumours had begun to spread about an impending British attack, and it wasn’t long before the East Surreys were on the move again, travelling to Houlle (27th), Maison Blanche (28th) and Méteren (29th) where plans were set out for an assault in the Dickesbuch area several days later.

The battalion travelled by bus from Meteren on 1 October and relieved the 9th West Yorkshires, and a company of the 10th West Ridings, in an area south of Polygon Wood. William’s unit had been ordered to hold the entire brigade front line, which, based on a description in the battalion War Diary, was almost non-existent, with the men forced to shelter in shell holes for cover. The ground had been continuously churned and re-churned by shelling and consisted of very loose soil, so was wholly unsuitable for digging trenches.

The position was at best precarious, and in addition to shelling, the threat from enemy snipers (who possessed a superior field of observation) was a constant danger. William had been due to take part in an attack on 4 October; however, he was killed the day before, most likely from shellfire.

William’s body was either not recovered, or later identified, and so he is commemorated on the Tyne Cot Memorial to the Missing in Belgium.