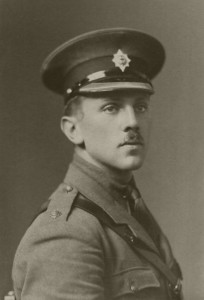 Walter Frederick Hoblyn was the youngest son of Charles Dennis Hoblyn, a London Stockbroker, and his wife, Lizzie Emily Taylor. He was born on 7 March 1893 in Paddington, London and educated at Lambrook School in Bracknell before attending Marlborough College between 1906 and 1911.

When war with Germany broke out in the summer of 1914, Walter was working as a railway official on the Guayaquil and Quito Railway in Ecuador but made immediate plans to return to the UK, and disembarked from the SS Trent in London on 23 December. Before the war, his family had taken up residence in Warren Wood, Wrotham Heath, and Walter gave this address when he visited the Dukes Road recruiting office in London a week after his arrival. He joined the 2/28th Battalion, The London Regiment (Artists Rifles) and was sent for training at the Richmond Park Camp in Roehampton.

3087 Pte. W. F. Hoblyn quickly rose to the rank of lance sergeant, and as a previous member of the OTC (Officer Training Corps) at Marlborough, was among those selected for an officer commission during early summer 1915. He was gazetted 2nd Lieutenant on 30 June and reported for duty in Windsor with No.2 Company, 4th Battalion Coldstream Guards (Pioneers) which had been re-designated from a reserve battalion, and as such their new role would have been in the construction of field works, the maintenance and repair of roads and approaches to the immediate front, and to assist the Royal Engineers, however, they could also be called upon to fight when required.

On 15 August, after several more weeks training, the Pioneers marched out of camp and entrained for Southampton, where they embarked on board the La Marguerite and sailed for France. On arrival in Le Havre, the battalion, which numbered 1,027 men, travelled by train to join the Guards Division, which had been forming southwest of St. Omer at Lumbres. Walter’s company detrained on the 18th and billeted at Wavrans, where they began a further period of field training, the main thrust of which consisted of four hours of digging trenches in either the morning or afternoon, interspersed with long route marches.

Two weeks later during the afternoon of 1 September, the battalion marched to the village of Cléty (south of St. Omer) where they immediately set to work constructing a line of new trenches, working up to eight hours a day, over a three-week period. On 23 September they were attached to the 2nd Guards Brigade and began making their way towards Loos, where they would provide support for the Guards Division in an impending attack.

The first part of the march from Cléty to Cottes took about seven hours with the men afforded a day’s rest before heading off the following morning towards the village of Haillicourt, which is southeast of Béthune. During this period Walter would have heard the pre-attack artillery bombardment thundering in the distance, a sound that would become considerably louder as his unit moved up the line towards the battlefield.

The battalion arrived at Haillicourt at 1:15 am on the 26th and assigned to the 3rd Guards Brigade; however, it was not long before they were on the move again and marched for a further six hours to Noyelles-les-Vermelles. Walter had been on the road for over 48 hours when he eventually reached the front lines and arrived just as three brigades of Guardsmen advanced on an objective east of Loos known as Hill 70. With no time to rest, the Coldstream soon found themselves employed in rebuilding trenches and reinforcing fortifications, and on the 27th, Walter’s company was sent after dark to assist the 3rd Brigade in consolidating their position on the hill. Two days later the Pioneers took over the reserve trenches east of Vermelles and were relieved by the Northamptons the following day, with 1, 2 and 3 Companies selected to remain behind for several hours and strengthen the defences for the incoming Division.

During the night of the 30th, while out repairing the wire with his platoon near Vermelles Water Tower, Walter was spotted by the Germans and shot in the spine. He was evacuated to No.18 Casualty Clearing Station near Lapugnoy where he died of his wounds at 7:15 pm on 1 October.

Walter is buried in the Lapugnoy Military Cemetery and in addition to being commemorated on the Platt War Memorial, also remembered on the Marlborough College Roll of Honour.