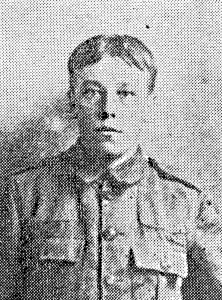 William Thomas Merritt (usually known as Thomas) was one of nine children of Henry Merritt and his wife, Mary Jane Burgess. He was born on 11 July 1895 in Maidstone and by 1901 was living with his family in a cottage between Basted House and Basted Lodge. Thomas’s father was working as a stoker in the Basted Paper Mill when he and his two siblings started at Platt School in October 1905, however, by 1911 the family had moved back to Maidstone and were living at 10 Brunswick Street. At the age of 14 young Thomas got his first job working in the wood trade and eventually followed in his older brother Henry’s footsteps and went to work in Postley Quarries in Maidstone.

At the time war with Germany was declared, the Merritts had returned to Platt and lived in Platt Common. Thomas enlisted in Maidstone during August 1914 and joined the 2/3rd King’s Royal Rifle Corps. Following a period of training, he was posted to France, arriving on 14 January 1915, and probably among a draft of 90 reinforcements taken on strength of the 2nd Battalion, KRRC on the 26th. At the time the battalion had been holding a section of the line in the Cuinchy sector that ran from the Béthune-La Bassée road to the La Bassée Canal.

By mid-March, the battalion had taken over trenches at Gorre in the Festubert Sector, and at the end of the month were based in the Rue du Bois area. Thomas went into action for the first time on 9 May when the Rifles attacked at the Battle of Aubers Ridge. The assault was not a success, and the British sustained 11,000 casualties for no material gain, with loses in the battalion numbering 251 men.

In September, Thomas took part in the Battle of Loos which is primarily remembered for being the first time the British used chlorine gas against the Germans. 140 tons were sent over towards enemy positions; however, adverse winds blew some of the gas back towards the British line causing 2,632 casualties. Fortunately, few died in this unfortunate mishap.

Thomas was still based in the Loos sector in early October, with his unit taking over the line north of Le Rutoire during the evening of the 7th. At 11:00 am the next day the Germans attacked their position, and at some stage in the afternoon Thomas suffered the effects of gas and was sent to the nearest casualty clearing station to receive treatment. He made a reasonably swift recovery and was able to return to duty two weeks later.

Towards the end of November, while in the trenches near Hulluch, Thomas was among a small party of men sent out after dusk into No Man’s Land to place 80 knife rests (metal or wooden frames on which barbed wire could be strung up) in front of the British line. The Battalion War Diary records one man wounded during the operation, and it seems very likely this was Thomas, who died three days later on 25 November at No.1 Casualty Clearing Station in Chocques.

He is buried in the Chocques Military Cemetery and in an obituary published in the Kent Messenger, his parents thanked Nobby Barnes and Mr and Mrs Holland for their ‘sympathy in the sad bereavement’.