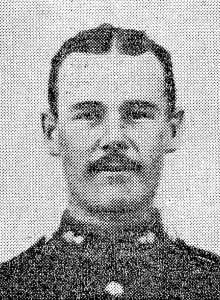 Of all the stories concerning the inhabitants Platt during the Great War, that of Daisy Ellis counts as one of the more tragic having lost her husband, two brothers and a brother-in-law over the course of the entire conflict. She was one of 16 children of Robert Ellis, a farm labourer from Goudhurst, and his wife, Margaret Ann King though sadly, seven of these never lived beyond childhood. Like her husband, Alfred ‘Len’ Parris, Daisy’s brothers James and Edwin both served as regulars in the pre-war British Army, with Edwin being the younger of the two, but the first to enlist.

Edwin Ellis was born during January 1891 at 1 Johnson’s Cottage in the quiet Kent village of East Peckham. Ten years later the family had moved to Gravelley Ways Cottages in Yalding and then afterwards to Old Road in Wateringbury. Edwin signed up in Maidstone aged 16 in 1907, and by 1911 had served several years as a driver in the 29th Brigade Royal Field Artillery, and was garrisoned with the 125th Battery at Louisberg Barracks in Bordon, Hampshire alongside his brother James who was part of the 126th Battery. Towards the end of the year, Edwin found himself drafted to India where he joined the 11th Brigade RFA. At that time, the 11th formed part of the Mhow (5th Indian) Division and were based in Jabalpur when war broke out in August 1914. Orders were received to mobilise at the end of August and the brigade left by train for Bombay on 7 October. Consisting of the 83rd,84th and 85th Batteries, the artillerymen sailed from Bombay for Europe in convoy with the Lahore (3rd Indian) Division on 16 October. During the journey, Edwin would have sailed past Aden, up the Suez Canal and briefly anchored at Port Said in Egypt. The convoy then headed north across the Mediterranean and docked in Marseilles on 7 November. Four days later the brigade boarded a northbound troop train, eventually arriving at the village of Gorre near Béthune on the 25th and tasked with targeting enemy sapheads, which were small disguised listening posts situated in advance of the enemy front lines in No Man’s Land.

During December, the brigade provided artillery support to the Indian Corps at the Battle of Givenchy, however at some point Edwin was sent sick back to the UK and admitted to the Royal Herbert Hospital in Woolwich, so may not have been present at this battle. He was eventually discharged and sent to recuperate at the Netley Hospital in Southampton where, according to his family, older brother James was also undergoing treatment at the same time.

Edwin returned to France in May 1915, perhaps in time for the attack at Aubers Ridge on the 9th, and Festubert later in the month. In September he was probably in action at the battle at Loos and may have witnessed the British gas attack being blown back onto their lines. On 5 December 1915, Edwin was admitted to No.2 General Hospital in Le Havre but discharged back to duty in the next day.

At some point during the next six months, Edwin was reunited with his brother when he was transferred to ‘A’ Battery of the 124th Brigade RFA. Armed with four 18-pounder guns, by the end of June 1916, the battery was based about 12 miles to the south west of Arras at Bienvillers.  On the 29th, ‘A’ Battery supported a raid on the German lines by the Leicester Regiment in a diversionary attack designed to draw attention away from the first major offensive on the Somme, which began two days later. Unfortunately, during this relatively short engagement, Edwin was killed by a shell and was buried in the Hannescamps New Military Cemetery, which was quite close to the front line at Bienvillers. James (who died less than a year later) probably witnessed his brother’s death and was present at his burial.

Edwin is recorded on the Platt War memorial as Edward Ellis.