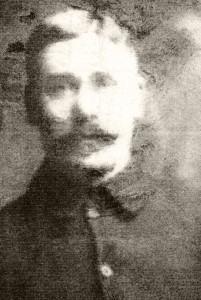 Before the war, recruits into the Army had to be aged between 18 and 38, with those of the younger end disallowed from serving overseas until they were 19. These guidelines continued after the start of the war in August 1914; however, men who had previously served in the forces could be accepted up to the age of 45. Much has been written about teenage boys who lied about their real age and found themselves at the front, however equally there were men whose years had surpassed the upper-limit, but still wanted to serve their country, so like their younger counterparts, were also somewhat more flexible with the truth.

Of all the men from the parish who saw action on the Western Front, Richard Flaxon Andrews counts among the oldest, and at almost 41 when he died, was the most senior of the tragic list of those who lost their lives in the conflict. In 1914 he claimed to be 37, and we can only imagine that he was enthused with patriotic zeal when he enlisted, as the vast majority of other Platt men who joined the Army at the start of the war were in their late teens and early twenties. Of course, he was by no means the oldest person to serve on the Western Front. That distinction goes to a Henry Webber from Tonbridge, who was 67 and had been motivated by a desire to serve with his three sons, who were all in uniform.

Richard was born at 24 Suffolk Place in the Marylebone district of London on 14 December 1875, the son of a butcher from Camden Town named Richard William Andrews, and his wife, Mary Ann (née Trees.) On 1 August 1898 in St Mary’s Platt Church, Richard, then aged 23 years, married 18-year-old Alice Violet Hayes of Wrotham Heath. Following the wedding, Richard, who had been living in Bermondsey and working as a packing case maker, returned to London where he and Alice had two children, Richard, born in Bermondsey in May 1899 (died 1902), and May Violet born in Vauxhall, during April 1901. They then moved to back to Kent as their next child, Albert, was born in October 1904 in Wrotham Heath with another son named George born in Addington during 1908. By 1911 the family had moved back in Wrotham Heath and lived at Railway Cottages, where their youngest child, Florence Mary was born. Richard found work in one of the local ragstone quarries but by the time war broke out in August 1914 was working as a general labourer.

On 10 December 1914, Richard travelled to Bromley to enlist and joined the 6th (Service) Battalion, The Queen’s Own (Royal West Kent Regiment) – a battalion formed on the outbreak of war with a nucleus of officers and men from the 1st Battalion of the regiment that had recently been stationed in Dublin.

Private Andrews joined his unit at Hythe on 19 December, and after spending six months in the UK, was posted to France on 1 June 1915. The battalion entered the front line at Ploegsteert Wood near Ypres on 30 June and remained there until September when they moved south to the area around Béthune.

In October the battalion suffered its first heavy casualties during a series of attacks on German lines, with the loss of three officers and 82 men missing or killed. The West Kents then moved to the Hohenzollern Redoubt where on 13 March 1916 Richard suffered a shrapnel wound to his head. After passing through No.9 Casualty Clearing Station and later No.2 General Hospital in Le Havre, he was repatriated to the UK on board the Hospital Ship Asturias and spent time initially in Fulham Military Hospital, and then convalescing in Eastbourne.

Richard returned to France on 16 June and rejoined his unit on the Somme on Sunday 25th. At the time he arrived, the West Kents were assault training north of Amiens (near Flesselles) in preparation for the forthcoming summer offensive in the region.

At 3:15 am on Monday 3 July the battalion attacked German positions south of Ovillers. Richard, who was in ‘A’ Company (alongside Henry Ashdown from Platt), found himself in the first wave of the assault, which along with ‘C’ Company, was tasked with taking the first line of German trenches. Ten minutes before zero hour Richard and his comrades crawled as far across No Man’s Land as they could, and as soon as the Allied artillery barrage lifted, leapt up and charged towards the enemy lines. According to the Battalion War Diary, and despite heavy enfilade machine-gun fire, they achieved their objective without too much difficulty and began bombing along the trenches towards both flanks so that they could clear out any remaining Germans, and secure the position. At this point, the two remaining companies (which included Peter Piper from Crouch) pushed through and moved against the second German line, which was about 300 yards further on. Richard’s company provided covering fire for this stage of the assault, however, due to the wire not being cut, it soon became apparent that the attack had failed, and men were mercilessly mown down in front of the defences, their limp bodies left hanging on the wire in contorted positions. At the same time, the battalion on Richard’s right flank had also faced stiff opposition, and suffered a similar fate, leaving Richard’s company dangerously exposed. ‘C’ Company’s left flank fell too, which resulted in the West Kents becoming cut off from both supplies and reinforcements. Small parties of men were observed heroically dashing across the open with ammunition and bombs, only to be repeatedly cut down by the machine guns. They gallantly held the captured position for as long as possible, however with the Germans quite literally hunting the men down with bombs and bayonets, and casualties mounting, the rapidly diminishing force was eventually forced to pull back, which allowed the Germans to regain their position.

Richard was listed as ‘missing in action’ during the day, and later in the month, his death was accepted for official purposes. His body was not recovered until over a decade later in 1928 when the remains of several men identified as West Kents were exhumed from the former battlefield. Richard was eventually found based on the titles attached to his uniform, and a service number engraved on a cigarette case. He was subsequently re-buried with military honours at the Serre Road Cemetery.