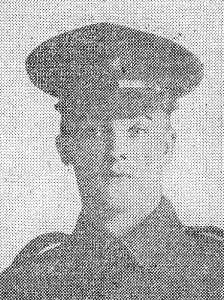 Four Bowens are remembered on the Platt War Memorial: three from the First World War and one from the Second. Those who fell in 1914-1918 are often assumed to be brothers; but, they were in fact cousins, and descend from a family that left Glamorganshire in Wales by foot during the first half of the 19th century. Their forebears’ destination was the mining community of Betteshanger in East Kent, where they hoped to find work, but on arrival in Platt, they found employment available in the brickyards, and the family stayed in the area.

Reginald Ernest Bowen was the youngest of the cousins and born in Platt on 27 September 1899. He was the third child of Thomas and Alice Bowen (née Terry) who were both from Wrotham and living in Platt Common at the time of Reginald’s birth (they later moved to 5 Whatcote Cottages.) He had nine siblings named Arthur, Sydney, Grace, Dorothy, Jack, Herbert, May, Amy and Ethel and attended Platt School from June 1904 along with Harry Stringer Gilbert.

On 19 October 1915, while working as a gardener, Reginald enlisted in the Army. His older brother Sydney had joined up in September 1914 and was serving in France with the 7th Battalion, The Buffs (East Kent Regiment) which perhaps inspired Reginald to do the same.

Possibly because he was only 16 years old, Reginald travelled to Dartford to enlist, maybe hoping nobody would recognise him and reveal his real age. On his enlistment papers he told the recruitment officer his age was 18 years, 30 days, and recorded in a medical as being 5’ 3½” tall, which was just over the average height for a working class 15-year-old boy, and the minimum to join the Army. At eight-stone he was also of an average weight for an enlisted man with his physical development noted as being ‘satisfactory.’ Reginald was passed fit for active service and joined the King’s Royal Rifle Corps and sent for training with the 6th Reserve Battalion at Sheerness on 29 October.

Reginald spent almost two years based in the United Kingdom before finally being sent to France on 12 June 1917. On arrival he was assigned to the 12th (Service) Battalion, King’s Royal Rifle Corps, but, shortly afterwards on 2 July was transferred to the 11th Battalion, who were based at Pernois and took on 90 reinforcements throughout the month.

By the end of the month, the battalion was working on railway tracks east of the Yser Canal and moved up to the front lines north of Ypres near Pilkem on 7 August, where they at once came under three hours gas shelling. Reginald’s first (and last) week in the trenches would have been tough. He was almost certainly involved with the various carrying and working parties that operated day and night, usually under threat of being killed from enemy shelling. It seems probable that he lost his life as a direct result of this on 16 August. His body was either never recovered for burial or later identified, and he is commemorated on the Menin Gate in Ypres.

He was just 17 when he died, and the few personal possessions that were returned to his parents included a cigarette case, three photographs, a metal mirror and a French book.