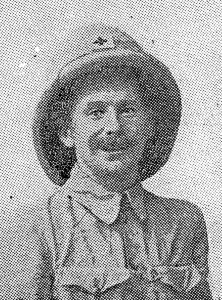 Joseph Baldwin was born on Christmas Eve 1884, and one of nine children of a carpenter from Wrotham named William George Baldwin, and his wife Mary Ann Streeter.

In 1891 the Baldwin family were living at 10 Grove Road in Sevenoaks with six of their children (William, Frank, Mary, Rose, Daisy and John) although Joseph, who was six, was resident at his grandparents’ house on Plaxtol High Street. Joseph’s father died in 1896, and by 1901 he had left home and was working as a grocer’s assistant at William Norrington’s shop on St. John’s Hill.

Joseph visited the Army recruiting office in Maidstone on 17 February 1903 and joined the Royal West Kent Regiment for 12 years. At the time of his enlistment, Joseph was recorded in an Army Medical as being 5’ 3 ¾” in height, weighing 112lbs with a fresh complexion, blue eyes and brown hair. The eighteen-year-old was passed fit for military service and sent to join the 1st Battalion of the Regiment at Shorncliffe on 22 May.

The Queen’s Own remained in the UK until 6 April 1904 when they boarded the SS Soudan at Southampton and sailed for Malta. Nine days later the men disembarked and were placed under canvas at Pembroke and Mellieha for about a month before moving to Floriana Barracks.

Private Baldwin remained in Malta for over a year – returning to England on 22 October 1905 and subsequently based at Dover until February 1906, when he was transferred into the (First Class) Army Reserve, having served his three years in the Regular Army.

On 2 January 1909, Joseph married Katie Baldock at St. Michael’s Church in Maidstone. The couple lived at 25 Greatness Road in Sevenoaks and had two daughters named Phyllis and Ada. Before the war Joseph worked as a postman, however, in August 1914 he was called back to the Colours and became one of 320 Reservists who arrived at the Regimental Depot in Maidstone within a day or so of mobilisation notices being posted.

Joseph was dispatched immediately to Dublin, where he rejoined the battalion and sailed with them for France on board the SS Gloucestershire on 13 August. Two days later the West Kents disembarked in Le Havre, and following an uncomfortable night sleeping in sheds situated on the quay, they made their way to a rest camp five miles out of town. The streets were lined with cheering crowds with an officer writing in his diary that:

The whole journey was a sort of triumphal progress. At every station there were crowds of people with cigarettes, little flags, sweets and flowers for the men. Great cheering, hand shaking, kissing of hands. Many shouted ‘Guillaume’ (meaning the German Emperor) and then pretended to cut their throats. In the towns the windows were full of people for half a mile on each side of the railway waving flags and handkerchiefs, and shouting ‘hip, hip, hurrah, Vive l’Angleterre!’

A week after the excitement of their arrival in France, Joseph’s unit found themselves marching towards Mons with heavy packs across cobble-stoned roads in the stifling heat of late summer. Joseph was a batman (personal servant) to a commissioned officer – a position he retained throughout his time at the Western Front.

The battalion’s first engagement with the enemy occurred on 23 August near Mons at the village of Tetre however, faced with overwhelming numbers of German infantry and superior enemy artillery, the West Kents were forced to retire under cover of darkness. During the Allied retreat into France, the battalion was in action at the Battles of Le Cateau, the Marne, the Aisne, La Bassée and Messines and Neuve Chapelle. Joseph was likely involved in some, or all of these actions, and spent Christmas 1914 based in the Wulverghem sector on the Ypres salient. Conditions in the trenches during this period were particularly squalid with life being a ‘dreary monotony’ with heavy rain making conditions worse.

In April 1915 Joseph is known to have fought at the Capture of Hill 60 which took place south of Ypres. He eventually returned to England on 9 February 1916 and was discharged from duty on 2 March having served his time with an exemplary record. By then his wife and children were living at 17 Whatcote Cottages in Platt, and Joseph returned to his old job with the postal service after receiving his discharge papers.

Incredibly, Joseph was summoned before the Wrotham Military Service Tribunal on 12 July 1916 and given three-months exemption. After having his full military career detailed in front of the committee at the hearing, it appears he was ‘left alone’ after that, however, still keen to do his bit, he joined the British Red Cross on 7 January 1918 and went to Mesopotamia (Iraq) where he worked as an engineer transporting the sick and wounded by motor launch. Joseph died on 16th July 1918 from erysipelas, which was a skin infection that if spread into the blood or lymphatic systems could prove fatal. An officer wrote to his wife:

You will have received an official notification of the sad news of your husband’s death. Permit me to add to it my deepest sympathy in the great loss you have sustained. Your husband has done splendid service while he was in Mesopotamia in transporting the sick and wounded. He died in a very noble cause and has added yet another name to the long, long roll of honour of those who have died for their country in the hour of its greatest peril. Do not be over-wrought with grief, and think of him as one who nobly died.

Joseph is buried in the Baghdad War Cemetery although the current condition of his grave is unknown. In October 1915 his brother John died of wounds while serving with the 9th Lancers, and was given a full military funeral in Sevenoaks. According to a newspaper article, Joseph had been among the mourners present.