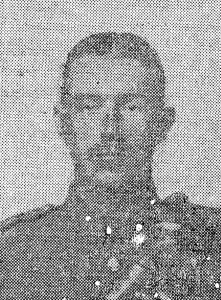 John William Bowen was born in Wrotham Heath during 1889, the eldest son of William George Bowen, a farm labourer, and his wife, Minnie Gertrude Heaver. He attended Platt School, and the family lived in the Railway Cottages, and by the time the war broke out, had moved to Whatcote Cottages in Platt. In 1912 John married Fanny Hyland from West Farleigh and a son, also named John, was born a year later.

He enlisted in the military at Bromley on 6 January 1915 and posted to Gallipoli later that year on 26 October, where he joined 59th Brigade, Royal Field Artillery which was part of the 11th Division. After the withdrawal from the peninsula at the start of 1916 John was sent to Egypt and became part of a force that took over a section of the Suez Canal defences at Sidi Bishr.

In June 1916 orders were received to proceed to France, and the brigade subsequently arrived on the Somme at the end of July. For the remainder of the year, John, who was a brigade signaller, would have been involved with the capture of the Wundt-Werk, The Battle of Flers-Courcelette and The Battle of Thiepval, which were all phases of the Battle of the Somme.

In 1917 John’s battery took part in further operations on the Ancre before heading into Flanders for the Battle of Messines, after which he was given ten days leave. On arrival back at the front, he joined ‘A’ Battery and was soon back in action at the Battles of Polygon Wood and Broodseinde before engaging the enemy again at the Battle of Poelcappelle, which was last in a series of attacks made by the British during the Third Battle of Ypres and the final engagement in which John would take part as he was killed by shellfire on 10 October.

I greatly regret to have to write and tell you that your husband was killed by a shell on the 10th October. He was killed instantaneously. His loss is quite irreparable, and we all feel it very much. He was just one of the very best, quite fearless and absolutely trustworthy in the most hard and unpleasant jobs. As you will know, he was a signaller, and was picked as one of the three best to go forward into the German lines with the infantry as our officer’s signaller a day or two before. The signallers and all of us have lost one of the stoutest and most popular friends, who will never quite be replaced. It is the death of such a man that makes me at times hate the war. I must end now. I cannot say how I sympathise with you in your loss, and everyone joins with me in sending their deepest sympathy with you.

John’s grave is in Bard Cottage Cemetery, which is close to Ypres on the Yser Canal.