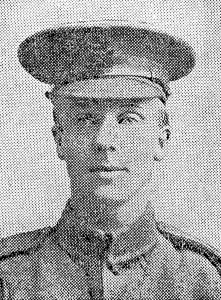 Unlike the Bowen cousins, the two Bance men commemorated on the Platt War Memorial were brothers and tragically killed within two months of each other. Bance families had lived in the district for over a century, and by the start of the Great War were reasonably numerous around the parish, with eight of them seeing overseas service between 1914 and 1918.

James Bance was born in Crouch in 1894, the eldest of five children of Thomas, a coal trimmer from Platt, and his wife, Louisa Adams, who was from London. He grew up in Borough Green at Spencers Cottages, which are situated on Station Road and built in the 1870s by Thomas Spencer, who, at that time, owned the Platt Brickyard. James’ father died in 1902 at the young age of 30, but nine years later his mother re-married to George Broad. In the years immediately before the war, James worked as a mill hand with his mother, step-sister and brother Thomas and lived at Haxell’s Cottages in the Platt Brickfields.

He enlisted in the Army at Maidstone on 29 August 1914 with Albert Edward Rayfield from Crouch and joined the 11th (Service) Battalion, The King’s Royal Rifle Corps. The battalion had been raised at Winchester in September 1914 as part of Kitchener’s Second New Army (K2) and formed part of the 59th Brigade in the 20th (Light) Division. The two Platt locals were sent for training at Blackdown before moving in February 1915 to Witley and then onwards to Larkhill in April. They were both posted to France on 21 July 1915 where they disembarked at Boulogne and proceded to the Saint-Omer area, where the division was concentrating. Immediately before going overseas James married a local girl named Ada Elizabeth Durrant, and a son named George was born a few months later.

Unfortunately James’s service records have not survived; however, he would have been in the Ypres Salient between February and July 1916 after which the battalion were posted to the Somme, where they found themselves entrenched opposite Guillemont at the end of August. On 3 September, James probably took part in an attack on the village that claimed the life of Reginald Thorndycraft from Basted (a stretcher-bearer in ‘A’ Company) and would have seen further action at the Battles of Flers-Courcelette, Morval and finally Le Transloy.

On 4 April 1917, the Rifles took the village of Metz with the loss of 29 killed and 100 wounded. They also captured 60 prisoners, four machine guns and three trench mortars. By early June the battalion was based northeast of Baupaume near the village of Noreuil. During this particular tour, one night, two companies situated in the front line came under regular trench mortar fire, and it appears that in one of these attacks James was mortally wounded and died on the 9th.

Sadly, like his brother Thomas, who lost his life at the Second Battle of Gaza during April 1917, James’ body was either never recovered, or later identified and consequently he is commemorated in Bay 7 of the Arras Memorial.