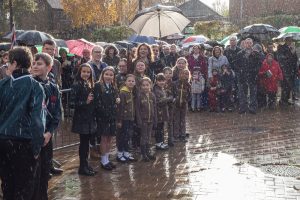 At 10.00am on Remembrance Sunday, as in previous years, our village gathered together at our War Memorial to remember and pay tribute to those from our village who gave their lives fighting for their country. The day, however, was even more poignant than usual as it marked 100 years since the end of the First world war and Armistice.

For some, the day began rather earlier, rising to be at the hall by 6.00 am to hear the piper playing The Battle’s O’er in front of the war memorial.

At 10.00 am we saw a good turnout of people, when we read out the names of those who are remembered on the Memorial Hall plaques. This was followed by 2 minutes silence and the laying of the wreaths by all our local groups including the School, Scouting, WI, Platt Society and the Memorial Hall Trustees.  During this short service we unfortunately had a short sharp rain shower, but just as we finished we were greeted by a wonderful rainbow to the north.

Over the course of the many weeks prior to this 100th anniversary much had been done around our village to remember those who had either fought in the First World war or those who had paid the ultimate  sacrifice with their lives, our Memorial being the permanent reminder of those people.  Our thanks to Scott for spearheading this project and for his huge efforts and endurance over many months which turned in to years of dedicated work, culminating in the Armistice Celebration Concert ably supported by Ruth Parkin and Paul Panting, and with many others involved as well.

With the ever-increasing numbers of people using our Village Hall the trustees considered that it would be wise to have our own deﬁbrillator. Although there are two around our village it was considered that distance and time would not be on our side in the event one would be needed, so we now have one situated in the entrance lobby on the wall opposite the main hall entrance. If you are not familiar with this piece of equipment and would like to know more we hope in due course to have an instruction class carried out by the First Responders.

As mentioned in previous Village News magazines we are still hopeful of acquiring a second bench for the Memorial Square; there has been some interest shown in this so if anyone would like further information please contact me or one of the other Trustees.