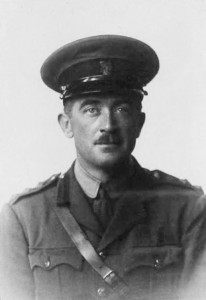 Percy Russell Grace was born on 6 June 1879 in Ballybrophy, County Laois, Ireland. He was the fourth son of an Irish banker named John William Grace and his wife, Mary Josephine Carew. John’s work took him all over the world (one of his sons was born in Chile), and in the 1880s eventually settled with his family in New York. After high school, Percy attended Princeton, where he studied until 1898 before re-joining his family, who by this point had moved to England.

In 1904, during a spell back in America, he wrote a summary of his post-Princeton life to his old college friends:

On May 18, 1898, I left Princeton and America, and followed my family over to England, where my father, because of being unable to stand the climate of New York, had decided to make his home.

My reasons for hurrying so precipitously after him were many and varied, but be that as it may, I arrived there and started in on a grand change of my plans and intentions for carrying out the balance of my existence.

To-day (sic) I am sitting on a veranda in Vivian, W. Va., near Edgar Clausen, and writing this letter, erstwhile the aforementioned “Ed” is trying to work out whether New York, with 20 W. and 10 L., has or has not a better average record than Cincinnati with 18 W. and 9 L. I have been away so long and feel such a stranger that I am unable to help him out in such matters.

The first thing I did after arriving in England and having finished the short run on the Continent, which always forms a part thereof, was to go up to Sunderland in the north and start in the “Yard” to do the practical work at first, and gradually work up until I occupied a menial position in the drawing office.

After about two years I went home to stay with my father, who was not feeling very well and prepared to go to Glasgow University to take a course there in naval architecture. I entered Glasgow in October 1900 and was there for two years, and just managed to get through by the skin of my teeth. In the summers between terms, I worked in two different yards, one near Glasgow and one near Newcastle, and in the autumn of 1902 went to the Royal Technical High School of Berlin, where I studied for a year.

In November 1903, I got home with a piece of paper profusely signed and countersigned, but this is the weakness which Germans have. I was not very well and remained at home until the middle of April 1904, and then articled myself aboard a new cargo steamer sailing from Newcastle to New York, and saw the sky-scrapers on May 1, 1904, and was soon rubbing shoulder to shoulder with them.

The first 1901-er I met was Everett Crawford “married, as usual, I mean like the rest of them who are not “Out West” go. Letters from the Class or otherwise handicapped, and since then I have been learning that there have been Princetonians in about every town or place that I have been in during the last six years and that I have been steadily missing them.

I was at the famous Henley Regatta, which was loaded with them, and never met one. To prove the rule I met Batt in Berlin, married by now, I expect. He has been lifting cups down at the University at Jena.

My plans for the future are a little uncertain, except as regards the coming Reunion, but no doubt I will start in somewhere in the vicinity of New York, and any communication addressed to 1 and 2 Hanover Square, New York City, will find me, and coming from Princeton it will be welcome, even should it be an unsettled laundry bill.

I am not married.

With warmest greetings, Yours ever, Percy Grace.

While overseas, Percy’s father had taken up residence at Leybourne Grange, near West Malling, but died in London shortly after Percy’s account was written in 1904. After three years further study in California, Percy returned to England in 1908 and became one of the first people to own a motor-car. Along with his brother, the well-known airman Cecil Stanley Grace, he went to Sheppey in late autumn of the same year and established a staff of skilled workmen and well-equipped workshops that made flying machines. Percy and Cecil were members of the exclusive Aero Club of Great Britain (Cecil was the fourth person to be awarded a membership certificate), and in 1910 Cecil entered a competition for the Baron de Forest Prize of £4,000 (about £425,000 in 2015) for the longest flight from England into continental Europe. He took off from Swingate Downs on 22 December and made it across the channel; however, adverse weather conditions forced him to land prematurely, but still attempted to make the return journey back to England. About 3:00 pm Cecil was spotted about six miles out to sea near Goodwin Sands before he disappeared from view. Several weeks later, on 6 January 1911, his goggles and cap washed ashore in Belgium, and a badly decomposed body fitting his description was discovered floating in Ostend Harbour on 14 March.

Percy was deeply affected by his brother’s death, and he ceased all his aeronautical work as a result of the tragedy. Later that year he decided to take a round the world trip with his wife Dorothy Septima Humphreys, whom he had married in 1910, and following their grand tour, returned to her pre-marital home at Malling House in West Malling. Two years later they moved to Wrotham Heath House from where Percy started the Platt and District scout movement.

Percy had inherited substantial amounts of money from both his father and brother which enabled him to live the lifestyle of a gentleman of ‘independent means’ in the years leading up to the start of the war. He made several more international trips with his wife – the last being in April 1914 when they sailed on the RMS Olympic (sister ship to the Titanic), for New York.

Realising his experience with aircraft would be of benefit to the military, Percy enlisted soon after war broke out and joined the Royal Flying Corps. His service papers mention his flying experience up until that point, noting that he had ‘gained technical experience flying machines since 1909, and owned aircraft from then until 1912’. In November 1914 Percy was promoted to 2nd Lieutenant; however, he does not appear to have flown at all until August 1916, when he took a piloting refresher course. After this, he served in Egypt with the 20th Reserve Wing and was hospitalised for about a month in March 1917 with a virulent form of tuberculosis. That summer he was mentioned in despatches and was serving as a Flight Commander in the temporary rank of Major.

On 25 June 1917 Percy returned to the UK, and on account of ongoing ill health, relinquished his commission in November 1918 and granted the honorary rank of major.

He never fully recovered from tuberculosis and eventually died on 27 February 1922 at Wrotham Heath House.